Seek Blessings From Shrinathji in Nathdwara

Soak in the religious atmosphere of this highly revered temple! 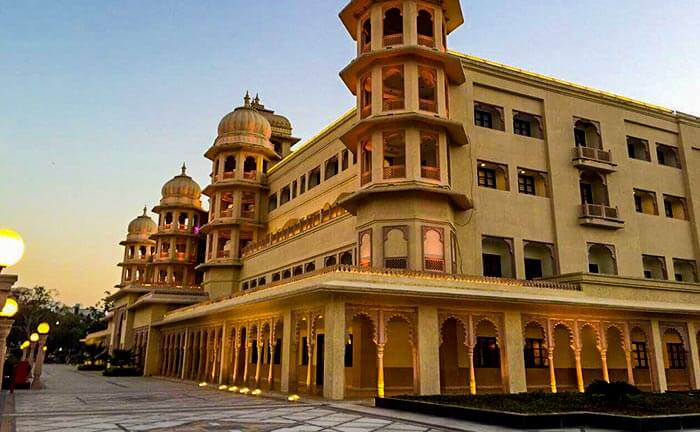 The small town of Nathdwara is known mostly for the temple that is dedicated to one of the most beloved Gods, Shrinathji, the child incarnation of Lord Krishna. Located in the Aravalli hills, this town lies along the banks of the Banas River and is 48 kilometres north-east of Udaipur. The town itself is referred to as Shrinathji, after the deity himself.

According to popular belief, the temple was built at the spot which was chosen by Shrinathji himself. It is said that, during the 17th century, the Mughal emperor Aurangzeb wished to have the idol remain with him in Agra. As a result, the image was taken out of Mount Govardhara, and Maharaja Raja Singh of Mewar offered his protection to the idol. On the way, the wheels of the cart got stuck axle deep at the village of Sinbad near Udaipur. Taking it as a sign, the accompanying priests decide to make it the dwelling place of the idol.

The Shrinathji Temple, is considered the living place of the deity, and resembles the structure of a haveli. It consists of rooms interconnected by passages and verandas, which is very different from the traditional temple architecture. The temple, like many other buildings in Nathdwara, is white washed with its doorways being flanked by paintings of elephants. The main attraction of the temple is the idol itself. Beautifully carved of a single black marble, the idol is in the form of Shrinathji lifting the Govardhan hills with his left arm and his fisted right arm on his waist. There is also a diamond placed under the lips. Various other symbolic expressions are also involved, with the U- shaped Tilak representing Radha’s foot and the Lotus flower representing her heart. The throne on which the idol lies represents Yashoda’s, mother of Krishna, lap. Also imprinted on the idol are the images of two peacocks, two cows, a snake, a lion, a parrot and three sages.

The temple is an attraction point for many devotees during the festivals of Holi and Diwali and especially Janmashtami, which celebrates the birth of Lord Krishna. The infant Krishna is treated with special care and is bathed, fed meals at regular intervals. Devotees also throng to the temple during the Aartis i.e., puja rituals and Shringar, the dressing of the idol of Shrinathji which is done seven times a day.

The Shrinathjitemple is one of the holiest places in the world. The atmosphere has a little magic and it is almost as if you can sense the spirit of lord Krishna himself, a little mischievous but a whole lot of good and unfiltered power. Devotees often claim that they have felt the presence of Lord Krishna which has a healing and calming effect on them. The Shrinathji Temple is worth a visit, if only to experience the magic in the atmosphere.