Take notice of the wild side of Rajasthan

Take notice of the wild side of Rajasthan

Undeniably, Rajasthan is abundant in terms of culture and history. Another proficiency of the town lies in its wide variety of wildlife. Rajasthan has a bunch of national parks and wildlife sanctuaries, all of which are famous for some endangered and rare species. Rajasthan receives a lot of wildlife enthusiasts throughout the year. Although the state is full of wildlife reserves, the most prominent ones are Sariska National Park, Ranthambore National Park, Keoladeo National Park, Desert National Park, etc. You can spot animals like owlets, langurs, crocodiles, tigers, hyenas, jackals and many others in Rajasthan. Apart from this, many varieties of birds and plants are also preserved in the sanctuaries. Moreover, you can enjoy activities like boat riding and jeep safari in the national parks. A wildlife tour to Rajasthan will surely be an unforgettable experience for you and your loved ones.

Check out a wide variety of birds at the UNESCO World Heritage Site. 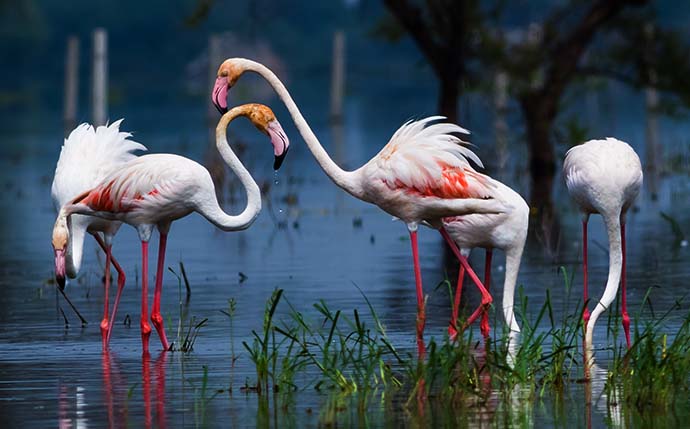 Rajasthan is famous for royal treatment and maharajas. However, there are certain national parks within the state that are home to various wild animals. It is a delightful sight to watch them. this article shall deal with the Keoladeo national park.

Keoladeo National Park was earlier known as Bharatpur Bird Sanctuary and it is situated in Bharatpur, Rajasthan. It is India’s famous avifauna sanctuary that hosts thousands of birds, especially those that visit the place during the winter season. Over 230 species of birds are known to be resident. It is also a major tourist center with scores of ornithologists arriving here in the hibernal season. It was declared as a protected sanctuary in 1971 and termed as a World Heritage Site.

Climate of the park :

Wildlife at the national park :

Various macro invertebrates like insects, worms and mollusks, mainly spotted in aquatic habitats are found in vast variety and in huge number in comparison to other group of organisms. These organisms are an important part of the functioning of the ecosystem and the food chain as they are the food of a number of animals, birds and fishes. The land insects found here in great numbers are good for the breeding of land birds. This is the reason why so many birds are found here during the winter season of our weather.

Migratory birds at Bharatpur Bird Sanctuary include several species of

And other Shanks, Stints, Wagtails, Warblers, Wheatears, Flycatchers, Buntings, Larks and Pipits, etc. are a common sight here! Along with that some major counts of Sambal, Chital, Nilgai(bluebuck) and Boar can also be found at the sanctuary.

Activities at the national park

Explore the wild side of Rajasthan 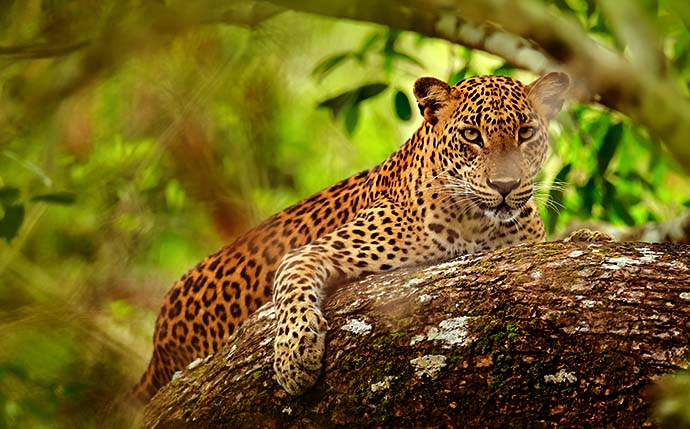 Now this is a place you wouldn’t want to miss if you are a wildlife enthusiast or bird lover then you must not miss visiting this Kumbhalgarh wildlife sanctuary. This is famous for its varied wildlife and greenery. Let us dig deep about this sanctuary.

Kumbhalgarh Wildlife Sanctuary is located in the Rajsamand District of Rajasthan State in western India. It surrounds the Kumbhalgarh fortress and covers an area of 610.528 sq. kms (236 sq mi). The sanctuary extends across the Aravalli ranges, covering parts of Rajsamand, Udaipur, and Pali districts, ranging from 500 to 1,300 metres (1,600 to 4,300 ft.) in elevation. It is part of the Kathiawar-Gir dry deciduous forests eco-region.

Wildlife of the park:

The sanctuary is home to a variety of wildlife, some of which are endangered species. The wildlife includes the

The leopard is the apex predator in the sanctuary. The birds at Kumbhalgarh include the normally shy and untrusting grey junglefowl. Peacocks and doves can be sighted feeding on grains scattered by the jungle guards. Birds like the red spurfowl, parakeet, golden oriole, grey pigeon, bulbul, dove and white breasted kingfisher can also be seen near the water holes.

Climate of the park:

Kumbhalgarh experiences a hot and dry climate during summers hence travelling is quite stressful during this time. Thus, during winters i.e. from October to February is an ideal time to visit, as the weather is comfortable for sightseeing and the chances of spotting wild animals in the wildlife sanctuary are also very high.

Activities to do at the national park:

The best wildlife haven of Rajasthan 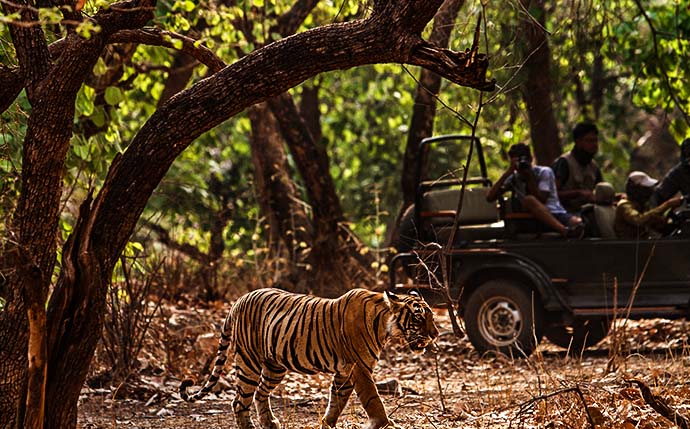 India is home to world famous Asiatic tigers. We house one of the largest populations of tigers in our country and Ranthambore is famous for them. In this article we shall be dealing with what all you can do while you visit this national park.

In northern India, Ranthambore national park is the biggest and famous national park in India. It is located in the heart of city of SawaiMadhopur in Rajasthan in the south eastern direction. It is approximately 130 kmss away from the city of Jaipur. Earlier it was considered as the place for hunting and punting for Royal Maharajas of Rajasthan, today it is a wildlife sanctuary securing a lot of tourist crowd all over the year. Many wildlife photographers and romantic couples find their way to this place.

Wildlife at the national park:

In case you are interested in amphibian species you can only find the common Indian Toad and the Common Frog. The park is most famous for its diurnal tigers.

Activities at the national park:

Climate at the national park:

The weather of Ranthambore during the summer is very hot. The highest temperature ranges from 46°C -23°C. The hot climate of the place makes tourists stressed but it is the perfect time to spot the tigers of Ranthambore National Park. Tigers are not visible during any other season in Ranthambore.

Have a look at rich flora and fauna in Alwar 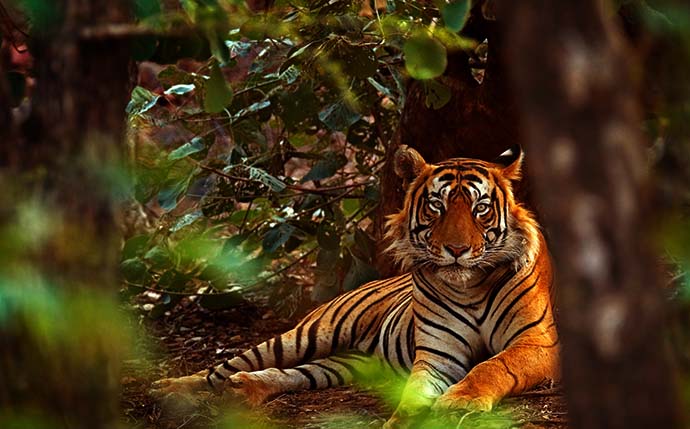 One of the many gems in wildlife reserves of Rajasthan, the Sariska Tiger reserve is house of famous tigers and leopards. The park is famous for its huge surface area occupancy and varied types of animals available to be watched. This article shall be dealing with Sariska Tiger reserve’s features.

Sariska Tiger Reserve is a national park and tiger reserve located in Alwar district of Rajasthan, India. It stretches over an area of 866 sq. km. (334 sq. mi) that comprises of scrub-thorn arid forests, dry deciduous forests, grasslands, and rocky hills in the fauna region. This area was restricted from hunting to preserve the wildlife of Alwar state and was declared a wildlife reserve in 1955. It was given the status of a tiger reserve for making it a part of India's Project Tiger in 1978. The wildlife sanctuary was declared a national park in 1990, with a total area of about 273.8 km2 (105.7 sq mi)It is the first reserve in the world to have successfully relocated tigers all over the world.

Wildlife at the national park:

Apart from the Bengal tiger, the reserve includes many species of wildlife, such as the

Sariska is also heaven for bird watchers with some of the rarest feathered species like:

The dominant tree in the forests are:

Activities at the national park:

Climate at the national Park

Sariska Tiger Reserve’s Weather and best time to visit Sariska Tiger Reserve is during spring season. Rajasthan has a warm desert climate, very hot and dry in summers and very cold in winters. Rains during the monsoon season are sparse, but it livens up the land that was parched by the summer. Making the rainy season to be the most appropriate for visiting this wildlife heaven!