Soak in the holy atmosphere of this pristine temple which draws people from all around. 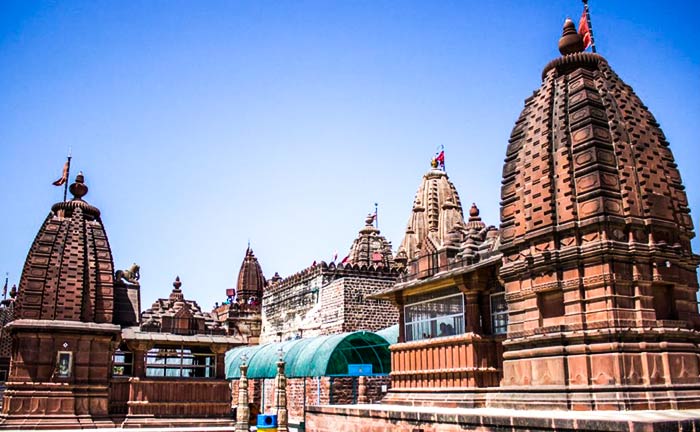 Situated on a hillock in the town of Osian near Jodhpur District, is an archeological phenomenon of the 8th century. The Sachiya Mata Temple is a holy shrine of the Osian Kuldevi and is also known as the hub of Hindu and Mahavir temples. In Hindu religion, Kuldevi is known for protecting an entire clan of a particular region. The temple’s past takes you long back into the time when there stood a temple of Goddess Chamunda Devi, who is known as the 9th and the final incarnation of Goddess Durga. As fierce and fiery as her name, Goddess Chamunda is known for her story of forgiveness and kind gesture she projected towards an Acharya.

The Acharya once had stopped the devotees from practicing sacrificial activities in her devotion. Hundreds of buffaloes were sacrificed, and their meat and blood were offered to her till the Acharya terminated such activities. The Goddess furious with the acts of Acharya, punished him and took his ability to see. The Goddess was taken by surprise when she saw that Acharya was not affected by her actions and asked for forgiveness from the Acharya. Thus, Acharya named her Sachi Mata and that is how the temple got its name. Now, aficionados from around the country offer her Chandan (Sandalwood) and Kesar (Saffron) in order to show their respect and devotion towards the deity.

The temple complex was built by Parmar King Upmendre in the 8th century which was further renovated later in the 12th century. There are a total number of 7 complexes in the area, 3 of which are situated on the eastern side of the complex and the rest 4 complexes are located on the western end. The outstanding feature of this temple is that it has gathered all the deities of the country in one place. From Lord Shiva to Goddess Lakshmi (Goddess of health and prosperity) you will find all of them in one place. Different forms of Lord Shiva like the ferocious and brave buffalo is also shown gloriously standing in the premises.

Located on the desert land of Osian, the temple is only 200 meters away from the bus stand. At the main entrance of the temple is a set of majestic plights of stairs laid down like a garland of flowers. The stairs lead the devotees to Goddess Sachi Mata for offering their prayers. The temple also depicts other forms of incarnations of Goddess Durga Ma and other famous Hindu deities.