Witness the spiritual power of one of the most revered temples in Jainism. 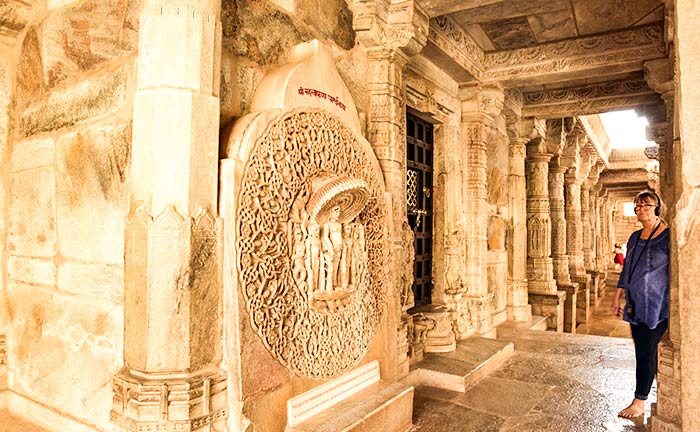 Unlike other temples, the Ranakpur Jain temple was built by a businessman who went by the name of DharnaSah. DharnaSah built the temple in the 15th century because of his divine intervention through his dream. He decided to devote the temple to the first tirthankara of Jainism- lord Adinath. DharnaSah was funded by the ruler of Udaipur – RanaKumbhla on one condition that his name would be used in the naming of the town and the temple, hence the name Ranakpur. Acquiring a plot of roughly 48,000sq feet, DharnaSah involved various artists on his project. Dharna’s dream of making the temple in the form of a celestial vehicle came true when he met the main architect of the temple Depa.

The shrine took 50 years to be built and was also invaded by the Mughals and was also at one point of time a covert for the dacoits. Later the temple was discovered again and was repaired. Even in the blazing hot sun the devotees inside the temple will not only feel relaxed but also cool as the marbles provide with a cooling effect inside the temple. As the position of the sun changes the colour of the temple changes as well providing a scenic beauty mesmerising and captivating everyone with its artistry.

The Ranakpur Jain temple is no ordinary temple, while it follows a typical routine of the devotees coming in and receiving blessings from the deity, its looks both exterior and interior are not something that can be found in other temples. The beautiful sculptures, statues, intricate carvings and also scriptures bring out the authenticity and the architectural heritage of the country.

The history of the temple is quite different from the history of other temples. It was also considered to be one of the Seven Wonders of the World. One of the main reasons that tourists love to visit the temple is because of its grandeur marble architecture. Designed in the shape of a NalingulmVimana or the heavenly vehicle, the temple has a unique facility wherein if an individual enters from any one of the four doors, he/she would end up in the main courtyard itself. Not only had this but the marbles of the temple not only serve as stunning architecture but also helps in the temperature regulation.

Ranakpur Jain temple is a symbol and a piece of art with the statues, the carvings, the scriptures and the sculptures so elaborate, pure, adept and perfect that they leave everyone hypnotized with their enthralling beauty.