Be prepared to witness one of the most spectacular religious sights ever ! 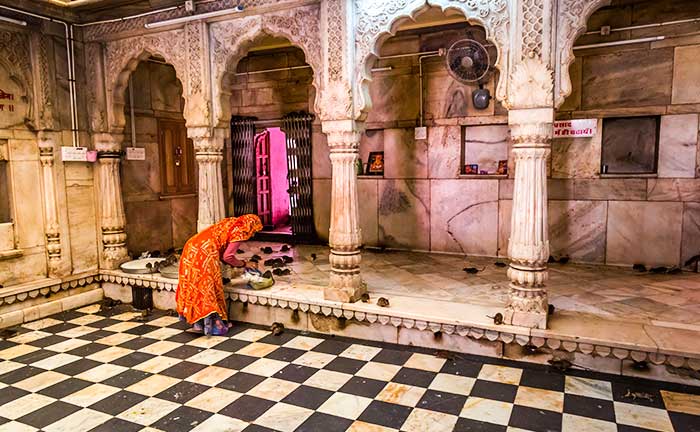 Karnimata Temple, also popularly called as the Nari Mata Temple, is flocked by tourist and the worshippers of Karni Mata. The deity is said to be an avatar of Maa Durga. It is highly believed that she had laid the foundation stones of the two forts in Rajputana, as well as the many temples, which are dedicated in her name. It is not the architecture or location, but the 20,000 (approx.) black rats whoare worshipped everyday. The fact is that, all the devoteesthrive to that place to get a view of the rats and the food, which is eaten by them, is assumed to be holy and later on served as ‘Prasad’.The black rats are called as ‘Kabbas’. People come from all over the world, in order to pay respect to the rats.

The holy shrine is also known as the ‘Temple of Rats’, as people pay respect to them. More than 600 years old and situated in Deshnok (30 km towards south of Bikaner). Varied tales and myths are associated with the temple, the exact history is still unknown.

The architecture has the Moghul effect, as it was constructed during that era. A beautiful marble façade with marble carving dons the temple’s both exterior and interior. Some of the individuals do think the entire process is a bit weird, but it is the fact that the black rats are worshipped religiously.

Moreover, amongst the black ones, few white rats are also always present, and worshipped similarly.The rats do not bother the devotees, but scampers around the idol of the Goddess, while nibbling on food and drinking milk.If someone visits the temple in the evening, one will find that ‘Bhajans’ and ‘Kirtans’ are sung, while narrating the story of Karni Mata.