Be a part of the holy and pious atmosphere at this divine temple. 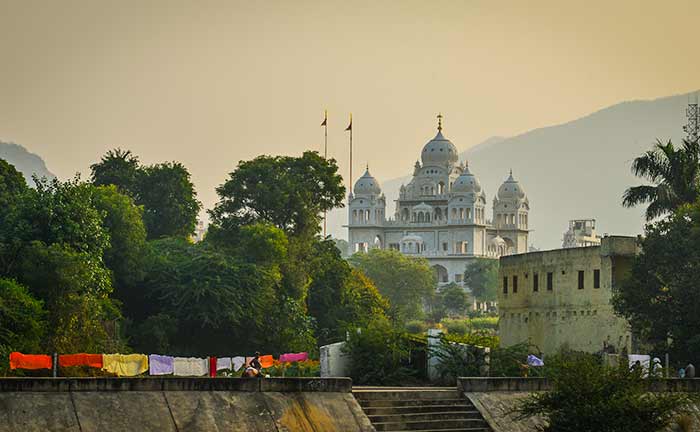 Pushkar is a small town in the Ajmer district of Rajasthan. It is a very holy site for both Sikhs and Hindus and every year hundreds of people make a pilgrimage to this place. Pushkar is said to have over 500 temples, most of which belong to the 18th century because the older ones were destroyed by the Mughal Emperor, Aurangzeb. Eventually, the temples were rebuilt and the largest and the most prominent of them all being the Brahma temple. The structure of the temple dates back to the 14th century but according to popular beliefs and legends, the temple is in fact more that 2000 years old.

The other Brahma temples are in Kullu valley, Uttrakhand, Barmer in Rajasthan, Kumbakonam Tamil Nadu, Panaji in Goa and Tirupatur in Vellore

The Brahma temple is dedicated to the God, Brahma, who is one of the Supreme Gods in Hinduism. Only a few temples are dedicated to Brahma and this one is the most important. According to the Puranas, Lord Brahma once came across a demon, Vajranabha, who was killing and torturing people. Brahma then killed the demon with his special weapon, the lotus. During the fight, some lotus petals fell and Brahma, when he came down to earth named the place Pushkar.

Eventually Brahma decided to perform a Yajna or fire sacrifice at the Jyeshta Pushkar. However, his wife, Savitri, was not able to join him in this Yajna. Irritated he asked the God Indra to provide him with a wife so he could perform the Yajna. Indra then brought before him, Gayatri the daughter of a Gujar, whom Brahma eventually married. Savitri eventually did make it to the Yajna where on seeing Gayatri became hysterical and cursed Brahma that no one would ever worship him. She later toned down the curse by allowing his worship at few places, Pushkar being the most prominent.

The temple is made entirely of marble with the red spire or Shikhara and the symbol of a swan, Brahma’s ride, at the main gate – the most distinct features. The entrance has huge steps made up of marbles which is leading to an arch gate entry inside the temple. The marble floor of the temple has been inlaid by several silver coins which have been given by the devotees as an offering. The idol has four heads, with each facing a certain direction. The four arms hold a rosary, a book, a water pot and kusha grass, representing worship, wisdom, eternal water and the sacrificing element respectively. Gayatri’s image sits on his left and Savitri’s to his right. Brahma also rides his chariot, the Swan.

The temple is visited by devotees all over especially on the occasion of Kartik Purnima. The temple remains open from 6:00am to 8:00 pm. The priests here follow the religious practice very strictly and only Sanyasis are allowed to enter the sanctorum.

Although, Pushkar is not the only temple dedicated to Lord Brahma in the world, but it is by far the most popular one. According to ancient Hindu scriptures, Pushkar temple and Pushkar Lake have been designated he status of one of the five sacred pilgrimages for Hindus. Pushkar is also famous as one of the ten most famous religious places in the world. As a result, the temple premises is always thronged by devotees as well as sages who have made the town their home.

Pushkar is a popular town amongst tourists as well as religious devotees. There are many attractions nearby the Pushkar temple, which attract travellers from all walks of life. Some of the main tourist attractions around Pushkar are: -

Pushkar is very famous amongst local as wellas international travellers. Therefore, plenty of accommodation options are available in the town. Ajmer, which is a big city, is located in close proximity to Pushkar has many premium as well as budget accommodation options available. During the time of Pushkar Fair, the prices of rooms go up considerably as thousands of travellers throng the city.

Pushkar is around 14 kms away from the city of Ajmer and is thus well connected with various modes of transport.

One of the most popular tourist places in India, Pushkar offers an amazing experience to all travellers and is a must visit.