A must visit place for your spiritual awakening and enlightenment. 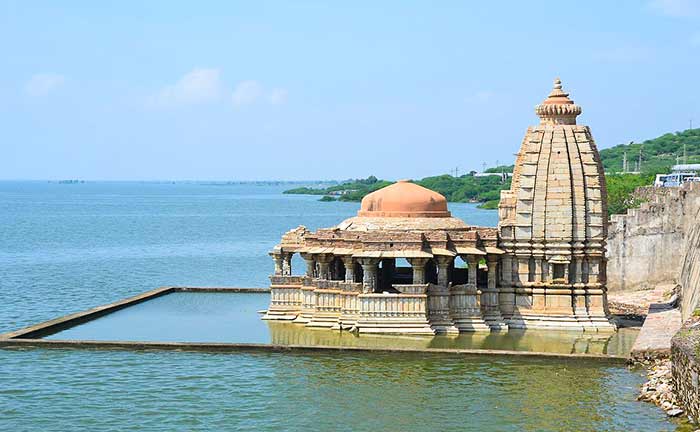 The architecture of the temple and the designs carved all over clearly shows the historical significance of the place. There is a big hall in the temple with a domed ceiling. Every wall, every pillar and even are ceilings have carvings all over. These carvings not only make the places beautiful but also tells a story or represents its history. The place is an excellent spot to click amazing pictures. One more added beauty to enjoy is the view of sunset in the water, which is clearly visible form the temple. The city Bilaspur in which the temple exists was established by the King Vigraharaja the IVth

The sanctum of the temple has a ‘Shivling’ in it, which is what the people go there to worship. A shivling is a representation of the Hindu mythological god ‘Lord Shiva’ also known as ‘Mahadev’. He is known as “The Destroyer”, who destroys the evil beings. There are several gods and goddesses in Hindu mythology but ‘Lord Shiva’ is considered to be the greatest god and the most supreme god. People contemplates him to be everywhere and anywhere on earth. He is picturised as having a snake spiralled around his neck, holding a “Trishul” (Trident) and a “Damru” (small Drum) in hands and having a third eye on his fore-head.

The beautiful temple is situated at the side of the Banas river in Tonk district of Rajasthan and the place is a must-watch. Actually, it is alongside of a dam named “Bisalpur Dam”. The nearest airport is Jaipur airport, which is around 3 hours of ride from there via NH52. Local hotels to stay are nearly 10-15kms away from there. It is highly suggested if going for a road trip there, carry sufficient food and water of your own. Also, going there with a private vehicle or by a cab booked for going as well as returning is much more preferable than visiting by public transport.

The view from the temple is amazing. What makes it so beautiful is that, it has the view of a mountain at one side and river at the other side. The temple is few foots down from the road, so you have to go down from the stairs. Around the temple is a courtyard, an open space for people to gather and enjoy the scenery. One can stay there, sight-seeing for hours and won’t get bored looking at the water flowing all around and listening to the soothing sound of water waves. During heavy rainfalls and high tide, the water even comes up to that open area and the courtyard gets partly submerged in the water. Before the Bisalpur Dam was constructed, the Temple used to be on a Hill but after the Dam construction the water level increased.