One of the grandest temple in Rajasthan will definitely leave you awe struck! 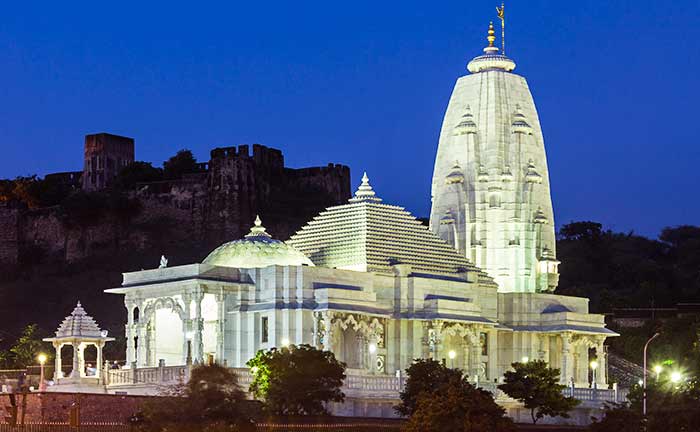 Jaipur, or the Pink City, is one of the most sought after tourist destinations in India. It is also home to many temples. The Birla temple is amongst its most beautiful temples. It is an attraction point for pilgrims as well as those interested in architecture.Although the temple is not very old, it is renowned for its architecture and design. Previously known as The Laxmi Narayan Mandir, the temple gets its name after the Birla Group of Industry whois responsible for commissioning this temple and several other temples across the world.

Built in 1988, the land on which the temple is built was given to the Birla group by the King of Jaipur for a token of Rupees 1(INR1) for the purpose of building the temple.The temple is dedicated to Lord Vishnu and his consort the Goddess Laxmi. The temple,in its entirety, is made up of white marble. The temple has three domes which represent the three main approaches to religion.

The temple is built on modern architecture which makes it different from other temples. Carvings of various Hindu Gods and Hindutexts from the Geeta and Upanishads are present along the walls. Apart from religious elements, several other philosophers like Buddha, Confucius and Socrates are also engraved along the walls. This reflects the secular nature of the temple. The marble walls of the temple glow at night under the lights and are a truly majestic site in itself.

Lord Ganesha, known as the protector of households, adorns the entrance of the temple. The interiors of the temple consist of a large panel depicting manymythologicalproceedings. The idols of many other deities are also presentin the sanatorium.The main attraction of this placeis the idol of Laxmi Narayan which is carved out of a single piece of marble and adorned with lavish ornaments and clothes. The museum is open from 8:00 AM to 12:00 PM and 4:00 PM to 8:00 PM. No entry fee is required to enter the museum.

The temple also houses a museum which displays antique objects and ancestral belongings of the Birlas. The entire temple is surrounded bylush gardens which add to the serenity and beauty of the place.

Cultural significance of the temple

The temple is thronged by devotees and architecture enthusiast throughout the year. But the peak season is during the months October to March when the weather is just right. The festival of Janmashtami, i.e., the birth of Lord Krishnais celebrated with great pomp and show. The temple is decorated with flowers and oil lamps. Holy prayers are sung, and devotees from all over come here to welcome him.

The Birla Mandir is truly the modern architectural masterpiece. It embodies the secular sentiment which is India is all about and a true representation of the country.