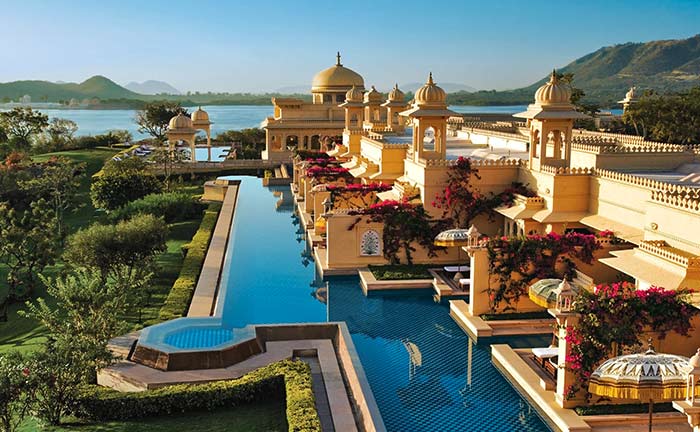 Udaipur, once the capital of Mewar, a princely state in Rajasthan acts as a backdrop for the elegant and the charismatic Udai Vilas palace. The palace has represented the state of Mewar and itsMaharanas(kings) through its intricate and alluring architecture since ages. Today the city of Udaipur is not just the proud owner of its bountiful palaces, crowded bazaars and its scenic beauty, but also flaunts its eloquent and rich Udai Vilas.

The palace rests on a 30-acre land alongside the tranquil lakePichola. The land has been a witness to the traditional and the punctual hunting trips of the Maharanas of the Mewar. The aura of the palace brings out the valour, and the bravery and the royal gestures of the historical eras and makes one feel as if they have been thrown at the end of a time tunnel. “The design of the palace is an assimilation of the spaces in traditional royal residential palaces, using Mewari architectural elements”, says architect Nimish Patel who along with Parul Zaveri brought the life into the glorious hotel palace. The palace has a uniformed white and cream theme along with the usage of vibrant colours such as pomegranate, raspberry , tangerine and saffron which are not only commonly coloured saris worn by the Rajasthani women, but they also compliment the city’s desert pallet. Other features such as the jharokas(fountains), the large domes, the ghummats and the ghumtis(cupolas) bring out more of the Mewars impressive and the time-honoured culture.

The palace has in total of 90 rooms each of which are accompanied by a courtyard and a semi infinity edge swimming pools. The courtyards in the rooms have significant importance due to their Mewari architecture. Each and every aspect and piece of the palace not only reminds of the culture and the gallant heritage of Mewar but also reminds us of the fact the traditional cultures and heritage can definitely go hand in hand with the modern world. The palace hotel proudly flaunts its gardens, courtyards and the fountains. The fountains and the reflecting pools bring over a sense of calmness and relief in a person. The guests of the palace hotel are ferried across the lake and then are brought in a golf cart to the main gate. Upon entering through the doors of the palace hotel one gets a feeling of royalty and grandeur. Not only has its architectural style which has been inspired from the historical ages and Mewar’s cultures and traditions is the talk of the town but also its dining is considered to be one of the world’s best.

The chefs working in the palace hotel are personally trained by the few living true royal chefs who used to work in palaces for kings. This not only brings out the culture of mewar through food,but it also speaks of its true roots and authenticity. The palace hotel has two dining areas the Surya mahal and the Udai mahal. Both the Surya mahal and the Udai mahal are outdoor dining areas, and also with two completely different backdrops. On one hand the Surya mahal is more of an informal setting which gives the feeling of a 30s colonial era, on the other hand the Udai mahal has a domed ceiling with midnight blue and gold painted all over it representing the sky sets a romantic mood.

The palace hotel also has the facility of a spa, in which the guests can relax while receiving an ayurvedic massage using ancient ayurvedic healing system. In conclusion the palace hotel of Udaivilas is a tranquilising sight and an alluring palace which is one of a kind. It also takes back one in time and makes him/she relieve the historical era through its architecture. It also reminds of the fact that history, culture and heritage can go hand in hand with the modern times.