Behold the vision of fascinating place in Alwar. 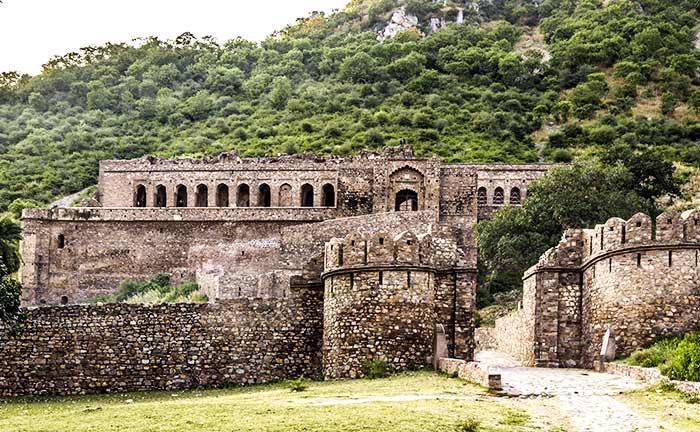 Originally, the palace was built by legendary Maharaja Jai Singh for giving a grand welcome to the Duke of Connaught, who is also Son of Queen Victoria. The impressive architecture of the palace and the décor has been appreciated by many guests till date.

It is said that since the palace was in very close proximity to the forest, “now tiger reserve and wildlife sanctuary” the balconies of the palace were used for hunting during the ancient period. In fact, the palace was constructed as a resting place during the hunting session of the king and his special guests.

The legend of Maharaja is known by all as he is known for a famous tale when he purchased 7- Rolls Royce and used them for cleaning the city; hence to make the visit of Duke of Connaught he arranged an architect from a foreign country to give the palace a blend of Indian and French architecture.

Splendid craft and painting are placed all over the palace and are maintained till date which definitely is a royal experience for the guests of the hotel.

Accomplished with a huge dining hall which can accommodate 80 people at one time, the palace has an aura of royal life and elegance. Open air lawn service and also bar for a variety of drinks, the hotel has managed to keep the standard of its founder the legend Maharaja Jai Singh.

Managed and preserved for over 10 centuries, the town of Alwar is surrounded by many temples and wildlife. Apart from the Hindu temple, the town has many Jain religion temples as well. With many sculptures and beautifully crafted statues, the temples have successfully shown the legends of the kings and their keen interest in the ancient craft.

The Aravali ranges on its own are a magnificent site and it becomes better when one can see it during a camel ride. Camel safari organized by the hotel for its guests to view local area and places, the hotel also makes sure for the comfort of their guests by providing sufficient drinks and food during the safari.

Accomplished with highly efficient amenities such as Spa, bars, tennis courts, etc. the Sariska Palace has been successfully making the stay of their guests as a royal visit.

Since the trip requires lots of outing as well as adventures the best months to visit the palace is October to march, these are the coolest month in Rajasthan.

The palace has highly accomplished royal suites with all the necessary amenities giving a royal look, as these are the room where once kings lived along with their queens.

There are other rooms as well with well accomplished facilities. Other perks of staying in the palace are huge bars, dining hall, swimming pool and lawns.