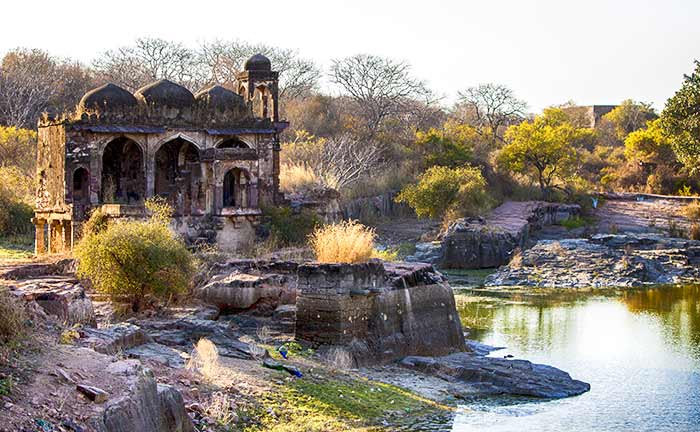 Ranthambore Fort is situated within Ranthambore National Park which is a popular tiger reserve and was a hunting ground for Maharajas of Jaipur dynasty. This magnificent fort is located near SawaiMadhopur, which is a town in Rajasthan. This ancient settlement has always been the main attraction of Rajasthan’s history. The fort stands tall on the top of a hill overlooking the entire park. It is surrounded by Vindhyas and Aravallis. The fort which is now a tourist attraction has a lot of historical significance for being the paragon of power for defending the Rajput territory from the attacks of foreign invaders. The well-planned structure of the fort was a major obstacle for the invaders. The majestic fort is believed to be built during 8th century by Chauhan ruler and it spreads over an area of 7 kilometres. The fort is known for its grandeur as it is surrounded by huge walls made up of stone which are about 7 km in length. Many parts of the forests have been destroyed by the effects of wars but still there are many buildings that continue to stand tall.

The fort has a splendid appeal as it filled with many architectural and historical ruins which fascinate the minds and eyes of the visitors. This include Hammir Court, Dullah Mahal along with various memorials, war monuments and gateways. The fort also has some religious significance as there are temples and mosques located within the fort that attract a number of devotees to seek blessings and the main attraction is Ganesh Temple. The fort is divided into two parts. The western section consists of the temples and holy structures while the eastern section is a wide area where number of species, birds, leopards, fishing cats can be spotted.

This historical masterpiece is prominent for its phenomenal architecture. The interiors of the fort can leave the visitors startled. The craftsmanship of this place is unbelievable, and it is not easy to match with any other ancient forts or buildings of that time. Ranthambore Fort is surrounded by splendid step walls, palaces, temples, residences, tanks, pavilions and cenotaphs. This fort has innumerable stone walls which symbolise the power of its architecture. The stone used in the stonework was shovelled from the inner region of the fort. Later those hollow parts were converted into ponds as water sources. The fort also stores many ruins and damage structures, some of those are of Hammir Court, Bada Mahal, Dhula Mahal, Phansi Ghar being the most eminent ones.

This top sight seeing place is a great combination of nationalism, love and bravery. Bird watching is one of the popular activities as people can get a view of the national park. Although many wars were fought to get the possession of the fort, but it was very difficult to conquer it due to its location and structure. After being attacked so many times, fort has not lost its royalty. The fort offers many interesting historical and architectural sites worth seeing and photographing.

This fort has been declared as the world heritage site by UNESCO. This massive fort is a great spot for exploring history as it stands out as a great example of impressive fortifications, splendid architecture and fascinating history that can leave any visitor spell bound.