This amazingly built palace takes you right amidst the nature and offers an insight into the royal lifestyle. 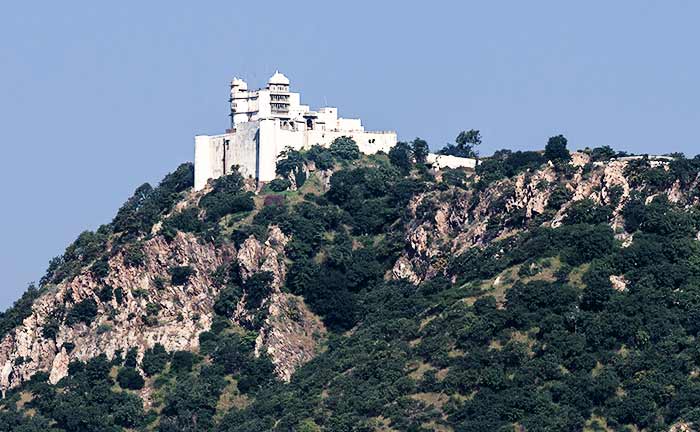 The Monsoon Palace is situated near the Sajjangarh Wildlife sanctuary of Kodiyat in Udaipur, Rajasthan. This palace is far away from the city area and close to nature. The nearest airport is Shikarbadi Airport, Goverdhan Vilas which is approximately 12.8 kilometres far and that would be a 30 to 40 minutes ride to the Palace. The views from the palace are amazing form some parts of the palace the whole Udaipur city can be viewed and obviously the wild surroundings of the palace add up to the beauty of the scenes from there.

The lake Pichola near the city palace is also clearly visible form the Monsoon palace. As the palace is at such height there is heavy winds blowing around. It is suggested if going by personal car or rented car, that the driver should be well experienced and skilled to handle the drive to that height. An interesting fact about the Monsoon palace is that it has been used several times for filming movie scenes too. You can find this palace in the movie “Octopussy” which is a James Bond film and the Palace was shown as the home for its Villain. You can also see the palace shots in the song “Dance Me If You Can” by the Cheetah Girls.

This Palace’s construction and design was started by the Mewar King MaharanaSajjan Singh in in 1884. The Palace is also called the Sajjangarh Palace and it is named so after its originator Maharana Sajjan Singh. Maharana Sajjan Singh was declared as the ruler of Udaipur in the year 1874 when his age was just 15 but his coronation ceremony was conducted in 1876 i.e. 2 years later. This delay in coronation occurred because in Hinduism, the important functions are held according to the dates given by their astrologers who are considered to pick out the luckiest dates for bringing out great success and well-being. Some people say the Maharana Sajjan Singh’s uncle Sohan Singh bribed or threatened the astrologers and that’s why the delay happened.

Maharana Sajjan Singh proved to be a great King and he worked really well for his kingdom’s development. He improved the overall infrastructure by improvising road ways, water supply system, environmental conditions and lot of other things in Udaipur including the construction of Monsoon Palace. For improvising the Environmental conditions of Udaipur, he increased the forests and improvised the lake systems along with dams. During the occasion of Queen Victoria’s crowning as Empress of India, Maharana Sajjan Singh was also given the Title of “Grand Commander of the Star of India”, Mewar kingdom under his rule is referred as Star of India in this title and Maharana Sajjan Singh is referred as its Grand Commander. This title was given to him in the year 1881 when his age was about 22. Unfortunately, his reign didn’t lasted long as he died in 1884 at the young age of 25.

The Palace is located at a great height of around 3000 fts and on the peak named Bansdara peak of Aravalli hills. Unlike other Rajasthani forts who are usually built with red sand stones, this fort is made of White Marbles. When the fort was built there were several aims of Maharana Sajjan Singh that were to be fulfilled by the Palace.

He wanted the Palace to have 9 floors for serving as astronomical centre and for keeping record of the movements of monsoon clouds in the nearby areas, this is the reason behind giving the name Monsoon Palace. Maharana Sajjan Singh was also planning this for increasing the employment in Udaipur. One more purpose of making the Palace was to use it as a resort for royal families. But Maharana Sajjan Singh died when the palace was only partially built and further construction was taken over by Maharana Fateh Singh.

Maharana Fateh Singh used to watch the Monsoon clouds from that palace. The Royal family later started using this Palace as their hunting lodge, they used to visit and stay there sometimes and used to do hunting in the forests and mountains surrounding the palace. The palace has high turrets attached to the main building and each turret used to have guards watching over and regulating the area. The pillars made in the Palace are also made of white marble and have beautiful patterns and designs carved on them of flowers and leaves. Other than the pillars there are other stunning beauties in the architectures of the Palace like fountains, domes and small but beautifully designed balconies called ‘Jharoka’.

The palace also has an underground reservoir for storing rain water and it can store water up to 2 lakh litres but it is not open for everyone to see, only specific people have authority to go to those parts of the Palace. One thing you will know after visiting the palace is that its interior designs and the cravings are marvellous and more beautiful than the look of the palace from the outside.

The current owner of the Palace is Arwind Singh Mewar who is also the co-owner of the city Palace, but the Monsoon Palace is now maintained by the Forest Department of India. The Monsoon Palace is completely surrounded an encircled by the Sajjangarh Wildlife sanctuary, this sanctuary was established in 1987 before that the forests were used for hunting as mentioned above. The sanctuary is well-protected and surrounded by a wall made of concrete named ‘Kishan Pol’. The history of the forest says that it was once used as dumping ground for weapons in the 17th century and some of them still exists in there. The animals reserved in the sanctuary are jackals, panthers, wild boars, hyenas, tigers, nilgai, sambhar deer, and other reptiles. Some people visit the sanctuary for bird watching and some come here for trekking too.