With its unique construction style and architecture, this fort is a must visit for history lovers. 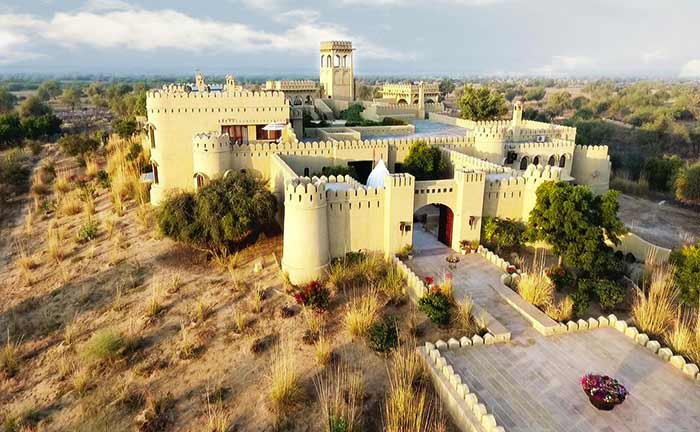 A thought that started with a dream, developed into an idea and further in the year 2009, Mihir Garh was born with the help of Thakur Siddharth Singh, the 14th Thakur Saheb of Rohet. Thakur Siddharth along with his beautiful wife gave birth to this magnificent idea of building a fort in the midst of the Thar Desert. Mihir Garh, also known as the Fort of the Sun is located 55 km southwest to the city of Jodhpur in Rajasthan.

The couple faced numerous rejections from friends and family whenever they presented their idea of Mihir Garh on the table. The thought of building a hotel under the scorching heat of the Sun was dismissed by a dozen of people.

The fort has a touch of the local environment connected to the Bishnoi community of the area. It is known to have an extraordinary structure because of its non-royal or non-Mughal pattern used by the architects. The Mihir Garh Fort, unlike other Forts of Rajasthanhas round edges and is made up of soft materials like clay, limestone and cow dung. The entire idea of giving a local touch to the Fort was implemented by using the materials that were easily available and were commonly used to build huts in the rural areas near Jodhpur.

The Mihir Garh Fort is a nine-suite fort which successfully captures the true essence of Rajasthan. The Fort is filled with ethnic decorations depicting the culture of Rajasthan. The detailed embroidery works as well as mirror work brings about a different shine to the insides of the Fort. The corridors and halls are beautifully decorated with paintings and vintage ornaments from the era of Mughals.

The culinary section of the fort does not miss out any detail about the Rajasthani culture. The breakfast is presented near the pool side which makes mornings all the more refreshing. Dinner time is accompanied with various cuisines and musicians that fill the era with pleasant melodies.

The outstanding feature about the menu is that it provides all kinds of cuisines and accommodates the best chefs from across the country. However, the menu is slightly dominated by the dishes from Rajasthan for obvious reasons. The guests usually get attracted towards the strong mixture of spice and boldness of tastes that is present in those dishes. People at Mihir Garh are always satisfied with the food courses and menu which satisfies their taste palate completely.

The Mihir Garh Fort was recently awarded as the most extraordinary hotel of the year award by lonely planet. The Fortress of Sun is surrounded by sand dunes from all the four sides and is known for its unique architecture.

Hundreds of craftsmen and artisans were hired to create this majestic structure that sits on a perched sand dune in the midst of Thar. The Mihir Garh Fort has become one of the most famous places that is frequently visited by people from across the country as well as from abroad.

The Mihir Garh Fort enables people to experience the life of the state as well as the life in the desert. Experiencing the varied temperatures and enjoying it at the same time has made Mihir Garh truly extraordinary.