Behold the magnificent spectacles that this incredible place offers! 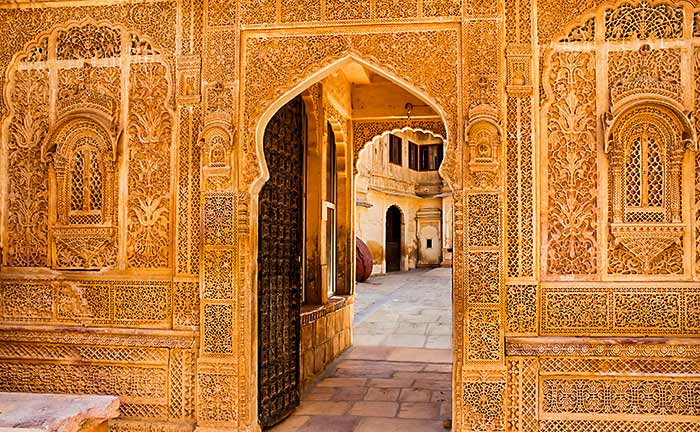 One of the most popular destinations of Rajasthan, Jaisalmer is well known for its palaces, forts and temples. The city lies in the heart of the Thar Desert and thousands of tourists and pilgrims alike, folk to the city.

The Mandir palace is over two centuries old with the foundation stone being laid by MaharawalMoolrajji of the Singh Dynasty. The palace was built in parts by his subsequent successors till the beginning of the 20th century; the latest and most beautiful part of the building was constructed by the late MahahrawalJawahirSingh and is called The Jawahir Vilas.

The Mandir Palace is well known for its architectural style which is Indo- Saracen. This particular style is a blend of the Rajput and Islamic architectural forms which were carried down by the artist from Afghanistan. The Mandir Palace also has some excellent stone carvings which are showcased in their ornate balconies, carved stone screens and canopies. The exquisite carvings are proof of the excellent local craftsmanship in their finest and purest form. Another interesting feature of the The Mandir Palace is its tower called The Badal Vilas, which is the tallest tower below the Golden City Fort. The tower provides an excellent view of the city and one must take the time to visit the tower.

The entire spacious complex is still possessed by Singh descendants, the grandson of the last Maharaja Hukum Singh. Prince Dr. Jitendra Singh transformed a part of it into a heritage hotel and it has since then become a first-class tourist destination. Other parts of the palace are now integrated into a museum which is accessible to the public for small entry fee. There are two buildings beside the hotel which have been converted into museums. One of them is for weapons and objects of daily use from the private collection of the Royal Family and the other one is to display the furniture and decorations from the old palace. The objects and designs reflect the charm of the pomp and lifestyle of the previous rulers of Jaisalmer. The complex is very well maintained with walls being covered with bougainvilleas giving it a pleasant atmosphere.

There are a few other places nearby to visit too such as:

Jaisalmer is also famous for The Thar Museum where ancient art pieces, ruins of the past rulers and their belongings are preserved. Another attraction is the War Museum which is an Indian Army war museum.

The Mandir Palace is situated at a very focal point in the city. The placeis nearby to all the tourist hotspots. The place itself is picturesque and provides an excellent photography spot to all those bloggers and tourists who are interested in keeping their social media accounts truly artistic.All in all,the Mandir Palace is a place which provides modern luxuries as well as an insight into the history of the royal family of Jaisalmer. The hotel is easily accessible and preferred by tourists and businessmen alike.