Visit this amazing palace if you want to understand the lifestyle of the royalty of Rajasthan. 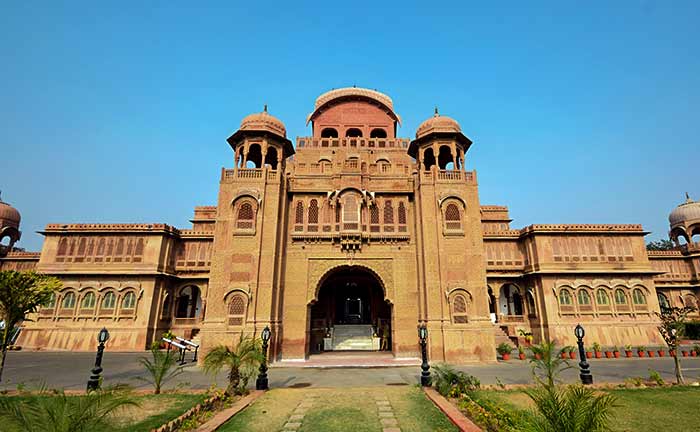 Since 1904, Laxmi Niwas Palace had only been hosting a handful of princelings, pre-eminent bluebloods of Europe, King George V and Queen Mary, some statesmen, a very few notable architects of the times-worn era. The palace is not built for all the commoners, but for the royal people. One, at recent times, can actually get a chance to step into the palace to have asneak-peak at the gold-laden walls and the hand-painted friezes. Baker’s and Lutyen’s architecture demand a closer inspection. And perchance, doesreflect upon the very fact that exclusion, at sometimes, does makes a place what it is like.

Your highness, Shri Ganga Ram Ji, in 1904, commissioned the Laxmi Niwas palace. The motive behind this were dual one – for creating a stately residence worthy of a Royal house in Bikaner and providing employment to the commoners of the town. A man of impeccable taste, His Highness, had taken under his supervision, the artisans, masons and builders, personally in their endeavours. The ornate filigree work on the walls of the palace, along with the hand-painted friezes, gold-laden walls and latticed screens, came under his artistic supervision. He too was avery good host to his highly acclaimed guests(having in his list were the royals and the dignitaries), who over stayed sometimes for few months in order to enjoy the warm hospitality.

While reflecting the splendour and panoply of the rajahs and maharajahs, one in literary sense ends to drift back to the photos from 1937, the time when King George V visited the palace. The Second Durbar, at that time was study at the Laxmi Niwas Palace, in fi de siècle opulence. From real and authentic Chintz to original drapes, objects’ art to the furniture of the Empire, gold-laden panels to hand-painted walls, had been preserved, and aided with great maintenance, till date. All the details, encompassing the halcyon era are preserved in all the rooms. Though being an age-old architecture, but all the modern amenities have been catered for the eminent guests of today. Rather no compromises have been made. This is reason, the Laxmi Niwas Palace is known as a delight, both for the travellers or holiday-makers and the curators.

Talking about all the modern amenities, the hotel premises caters for all the sport facilities, with an illuminated tennis court, croquet lawns, table-tennis, badminton along with putting all the greens. One would never mind a couple of sets, after sunset, or a refreshing swim or for that matter a round of billiards.The bars caterto a plethora of tantalising tipples, a rare glimpse of the spoilers of the earlier hunting expeditions. The chefs present, are always making their best effort to come up with the Royal cuisine of Bikaner, while also going with the local fare liberally. The food reflects the warm hospitality laden with culture, at the Laxmi Niwas Palace.

From traditional Indian ghazal, to jugglers and acrobats, to fire dancers and the folk singers’ troupe – all these helps in enlivening up the evenings at the palace’s courtyard. But to organise all these, a day’s notice is asked for, by the authorities.

Various social events, fashion shows, or filmography, are held regularly here. The jaw-dropping interiors and the grand exteriors serve as the creative aspect for the photographers, designers’ and likewise the directors. Whether it is corporate evenings or weddings, the palace offers to the esteemed guests with personalised banquet arrangements, theme-based evenings, as a respite from the daily hustle and bustle of life.