This amazing fort has stood the test of time for 500 years and offers you a once in a lifetime experience. 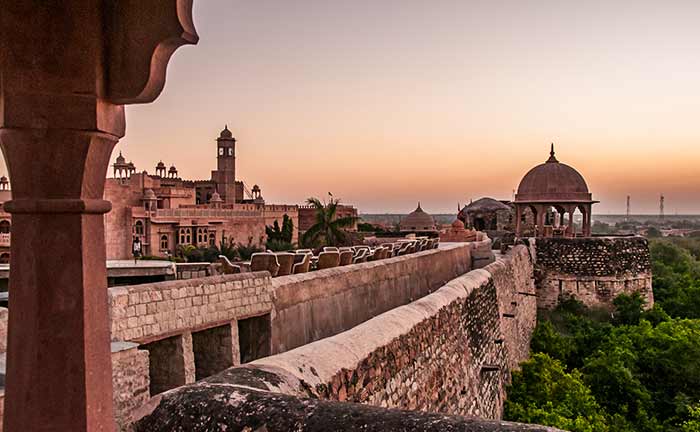 Khimsar Fort was built by RaoKaramsji in the 16th century.RaoKaramsji was the 8th son of RaoJodha, who is creditedfor founding the beautiful city of Jodhpur. The fort of Khimsar is in propinquity of Khinvsar village, which comes under the Nagaur district of Rajasthan.The city of Nagaur lies halfway between Jodhpur and Bikaner.

The more than 500-year old fort has undergone metamorphosis and is an overhauled hotel nowadays. The notorious Mughal Emperor, Aurangzeb, used to stay here. Also, horde of black deer wandering is a scene frequently observed here. A trip to this fort-cum-hotel would be an exhilarating experience and one to be reminisced! The beauty of this place lies in the fact that it holds all the luxuries despite being in the middle of the Thar desert, and keeping the rural flavourintact simultaneously.

The hotel is surrounded by lush frondescence or greenery, which would surely entice every visitor to take a stroll around the ramparts of the citadel.Being a hotel amidst desert, it is indeed a rarest of rare of commodity. Sundry variety of fauna and avian species can also be seen here. The fort has witnessed some fiercely fought battles, and the fortress has been sought after for centuries.

Khimsar Fort has been guerdoned and vouchsafed with the prestigious 'NATIONAL GRAND HERITAGE AWARD FOR EXCELLENCE,' which is presented by the Department of Tourism, Government of India and is the paramount and apex award.There’s plenty much to add to your trip as there's plethora of temples and spiritual places to visit, so if you are a devotee, you shouldn’t miss treading down to these religious sites.

One first impression, the fort seems like a massive and intimidating stone structure built on an equally intimidating hill with its steep climb. It makes you think of the difficulty of the medieval period when people climbed such places without the cars and other powerful engine vehicles that we have today. The massive fort with its grey walls is surrounded by hills which are run over by greenery. The main centre of the fort is surrounded by the walls on all the four sides. The walls have four bastions, each of the bastions overlooking a cliff. Though there are many cracks and, in some places, and in some the walls have crumbled down, it remains a strong structure with most of the wall still intact. Many of the tall archways sadly are now in a half-broken state but one could still make out that the archways had been magnificent once with its huge carved stone pillars. The feel and the atmosphere around the palace are one of grandeur in its silence.

Since the Rajputs were the last rulers of the fort, a number of Hindu and Jain temples can be found here. There is the Hanuman Temple in the idol is carved out of a single stone. As hanuman is the supreme protector in Hindu Mythology, this idol showcases a demon at the feet of the god Hanuman. On the topmost part of the fort, there is the Rani Mandir which was made especially for the royal ladies of the family. The Rajputs were known to be very religious and performed many rituals before going off to a war as they believed that it was very auspicious for them. There is also another temple which has a four-armed god.

Main attractions in and around of Khimsar includes theNagaur Fort,NilaMoti Trust and Black Buck Safari.

Karamsot Rathor, who is the descendant of the family this fort was built by, still lives in a part of the fort while the majority of it is open for tourists to savour the Rajput culture and hospitality.The Khimsar Dunes village, which is a small drive away from here, is encompassed by sand dunes; a treat to watch.These surroundings have the rural flavour in its truest sense andare synonymous with the setting here.The rural huts here are meticulously and neatly designed to be complementary to the eco-friendly atmosphere.

The Thar deserts solitude and serenity is one to look out for! A mini lake emerging out of nowhere seems to be a mirage ostensibly. One can enjoy a camel ride through the sand dunes and an arranged jeep ride through the Black Buck reserve. The reddish-brown sand is beautiful to watch, and the golden sunset just adds to its beauty.

More about the Fort

The differentiator for the Khimsar Fort is the fact that it is a family runhotel and the present generation of the royal Rajput lineage still resides in theiconic fort and graces it. The staff today also are the direct descendants of the family that served the rulers of the royal lineage effortlessly through decades. This helps the fort to retain its original identity, tradition, and culture. The etiquettes of the hospitality that should be served are being indoctrinated through generations and have been passed over from generations to subsequent generations.Interior of the fort includes all the luxuries that would surely tantalize hedonists while keeping the feel of a fort intact.

A pool in the front of it acts as a perfect appurtenance for the fort. Rajasthan's rich diversity and culture resides in the Khimsar fort; the place continues to amaze visitors with its charm and grandeur. It has been an important site due to its vast history and unmatched architecture. The architectural excellence of this place is well felt and is conspicuous when one gets acquainted with the atmosphere & enthralled by it.The fact that the placeis already been awarded by Ministry of Tourism speak volumes of its magnificence and hospitality. More additions are being made to further enhance the rich feel of the place.

Khimsar Fort is a must-visit for people who yearn to have a feel of royal luxuries in the modern time.Whole gamut of disparate adventures adds great re-visit value to this corner of the world. A sojourn here would guarantee great experience of a lifetime owing to its natural beauty mixed with humane touch. Thewide variety of activities on offer makes Khimsar a perfect holiday destination the expend your time at!