Explore the amazing architecture of the Kankwari Fort. 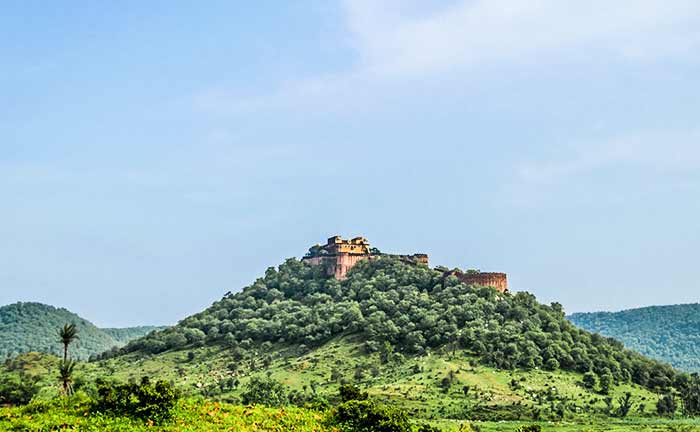 The Kankwari Fort is situated among the Aravalli hills in the Sariska Tiger Reserve in Kankwari village of Alwar district, Rajasthan. This fort is at a distance of 126 kilometres from the Jaipur International Airport which will be nearly 3-4 hours of road trip. The trip will be long but with the beautiful natural scenes around will make it delightful.

This fort was used centuries ago primarily for keeping the political prisoners into custody over there. Reason, behind this is the natural camouflage around the fort. Usually in the olden time periods forts were made at high mountains and hills to make them visible from a far distance. This fort however was constructed on a relatively short hill and is in the middle of forest and mountains making it a safer place for imprisonment. This fort’s historic significance increased because of the imprisonment of DaraShikoh and you will know his story after further reading.

The Fort was made by King Jai Singh during the 16th century. King Jai Singh was the ruler of Amer and was given this position at a very young age because of the predecessor’s death in 1621 and he was the only successor for the throne. Along with this he was also the senior general of Mughal Empire and worked in the rule of Shah Jahan and then his son Aurangzeb. Originally, Shah Jahan and his elder sister Jahanara wanted DaraShikoh to be the next successor after the reign of Shah Jahan. Although, the other son Muhi-ud-Din-Muhammed (known as Aurangzeb), was not happy about it because he wanted to be the next successor.

Aurangzeb therefore imprisoned his brother DaraShikoh in the Kankwari Fort for getting his throne. Aurangzeb chose this fort for his brother’s imprisonment because it was at a proper distance from Delhi according to him and it was under the supervision of one of his most trustworthy people Jai Singh. It is said that Aurangzeb surrounded the Fort from all the sides with a huge rampart and kept it guarded from all around by his armed soldiers so that the supporters of DaraShikoh from the Mughal army couldn’t rescue him from the fort.

The view from the fort is incredible, there is a small lake nearby which is visible from the fort. There are a lot of rooms and hallways in the fort that are beautifully made with designs and carvings made on the walls. Walls have designs carved on them which are also painted colourfully. Besides the rooms there are open spaces, balconies and open galleries from where one can enjoy the fresh natural air and the scenic beauty around. There is no glimpse of city chaos anywhere to be seen from the top. Completely relaxing and peaceful environment with pure natural mountains, water, trees around.

The road that leads there has mountains and forests on both sides. The fort is completely surrounded by forest area and the back of the Fort has really dense forest region. There are forest gypsies’ facility available for reaching the Fort. The fort is approximately 22 kilometres inside the forest. It is highly suggested to carry a camera, food and water because the place is in a remote location.