A wonderful experience awaits you at this architectural marvel! 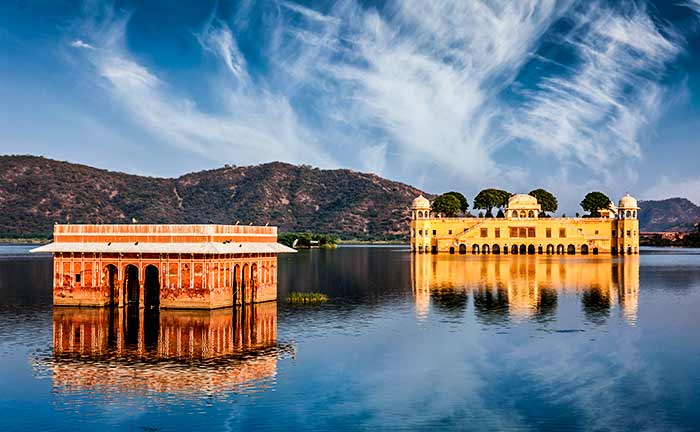 Jal Mahal which translates to Water Palace is in the capital city Jaipur of the state Rajasthan. The name comes from the fact that this beautiful structure is built in the middle of the lake Man Sagar. It was built in the 18th century by Maharaja Sawai Pratap Singh. The high domes, chhatris and cupolas are found as an integral part of the palace architecture. Rajasthani art is the centerpiece of the depictions on the walls of the palace.

The palace seems to be just one storied during the flooding if the lake but in reality, the palace is five storied. The four stories are submerged inside the lake. The building is made up of red sandstone and the roof contains Chhatri,which are octagonal at four corners, are of the Bengal style.

The views from the palace are mainly of the lake but it is surrounded by the picturesque Nahargarh also known as Tiger-abode hills, they contain quartzite rock formation which is part of the Aravalli hills range. Opposite to the lake are the shrines of the royal family over which chhatris and cenotaphs with intricate carvings are erected which were built by Jai Singh II. This area encompasses landmark gardens.

The eye-catching view and the hundreds of migratory birds seen in the lake make the palace the best example of Rajasthani architectural excellence. The Rajputi style wooden boats observed in the Man Sagar Lake were crafted by the skilled traditional boat builders from Vrindavan.The flood lights at the nighttime makes the palace look astonishingly beautiful.

This palace provides a serene ambience compared to the chaos of the city surrounding it. From the innards of the palace one can observe the lush foliage. The deep blue waters in contrast to the light-colored sandstone of the walls of the palace are a sight for sore eyes. The wall of the palace holds back millions of liters of water and the seepage of water has been prevented for over 250 years due to the lime mortar which was specially designed for the palace.

This palace is 4km from the Jaipur - Amer route. This palace has become a pleasure with art exhibitions, and interactive workshops. The palace architecture shows Rajasthani culture along with the Mughal style inspirations. The Man Sagar lake accommodates a diverse marine life and many birds can also been observed during the visit.