Offering panoramic views, this 800 years old fort has a long story to tell which you would love to hear. 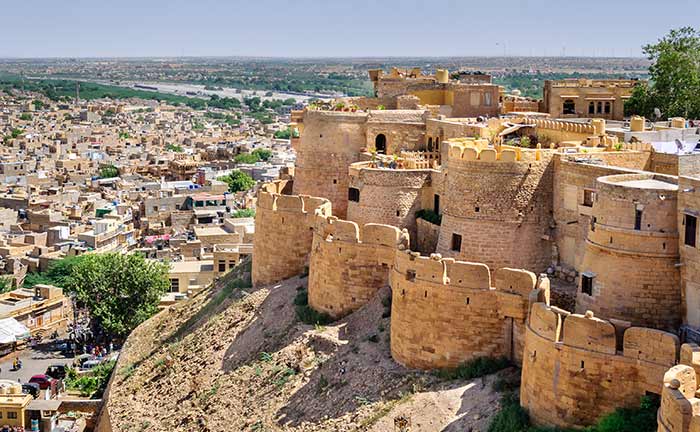 Jaisalmer Fort, bearing a rich history of 800 long years, is waiting to tell you the story of its heydays. Along with history, art and culture, this fort will give you an eye-blazing sight of unforgetful panoramic views. Jaisalmer Fort mimics as if it has been made up of gold. That is because it was built with yellow sandstones which, on the falling of the sun rays, gives it a golden or yellowish-brown hue. If you want to witness the scenic beauty of the fort, you should take a look at it from outside, especially in the morning and in the evening, which gives it a tawny lion colour and a honey-gold respectively. At that very time, you can observe the fort camouflaging a yellow desert that gives it a golden adoration. That’s the reason Jaisalmer Fort is well known as “Sonar Quila”(Golden Fort).

Jaisalmer Fort is still standing tall in the vicinity of the great Thar desert on Trikuta Hill to the southern edge of the city. The hill, it is standing on, is providing a base to its magnificent fortification to dominate the entire skyline, one can see it clearly being many miles away. Due to its alluring history and architecture and stupendous view, it, along with other five forts of Rajasthan, was taken into the list of UNESCO World Heritage Site.

Talking about the history, Jaisalmer Fort was built by RawalJaisal in 1156 and the city of Jaisalmer was established by him, thus went by his name, Jaisal. It is said that RawalJaisal confronted with Alauddin Khilji of Delhi about an eight to nine-year due to a provocation made by his army which was a raid on the treasure carried by a caravan of Sultan AlauddinKhilji. By the end of it, he faced defeat and the Rajput women committed Jauhar (which was mostly done by the Rajput queens and women just in case their king got defeated so to escape from the disrespect of enemies).

During the ruling of the king RawalLunakaran, Jaisalmer Fort was again attacked by an Afghan ruler named Amir Ali. But the sad truth was when he realized he was going to fight a losing battle, he slaughtered his womenfolk as there was not much time at hand to arrange a Jauhar. As unexpected as it sounds, the army of Jaisalmer became victorious after getting reinforcement in the nick of time. He again fought with the Mughal emperor Humayun when the fort was under attack. However, the fort remained under the authority of Mughals until 1762 when MaharawalMulraj become the king of the city. Due to its strategic isolated location, this fort didn’t experience any attack or plunder from the Maratha. The British also let Maharaja Mulraj retain his supremacy on the fort and assured him to send protection in case of any invasions.

Jaisalmer used to be the trading route for international commerce, but the popularity got declined as the port of Bombay become more popular for the international trade and transit. After the independence, the ancient route was shut down and it went through an economic depression. However, it is now one of the tourist hotspots of Rajasthan and the revenue is largely generated for it being a popular tourist destination.

You can see one fourth people of old city(about 4000 people) is still residing in the fort complex. However, due to the population rise that resulted in the congested spacing, people moved on to the foot of the Trikuta Hill.

You can enter to the fort through four highly fortified entrance gates named as Ganesh Pol, Akshya Pol, Suraj Pol and Hawa Pol.

You can find an amalgamation of Rajput and Islamic style of architecture which is quite fascinating. You can find many Havelis built years ago by wealthy merchants for their luxurious living with sandstone carvings. Many of the Havelis are spread across several levels with countless rooms with well adorned archways, doors, windows and balcony. Many of the havelis are abandoned or turned into museums, but some other are still having residents who bear the genetic footprint of original builders.

The fort had an exemplary drainage system known as “ghutnali” which used to prove the easy and an effective way of draining the rainwater away from the fort from all its four directions. However, the heavy and haphazard constructions in and around the complex have put the system in jeopardy by reducing its effectiveness.

Today, the Jaisalmer Fort is facing some challenges due to some external factors such as population rise, inadequate civic amenities, water seepage, seismic activity around the Trikuta Hill which is a weak sedimentary rock foothill that makes it more vulnerable. Though, so many initiatives have been taken to deal with those challenges effectively.

If you are in Jaisalmer, you need to get your camera ready to capture its dazzling beauty along with getting a glimpse of its rich history and culture.