Put your guidebook aside and explore this amazing fort to experience the history of Rajasthan at its best. 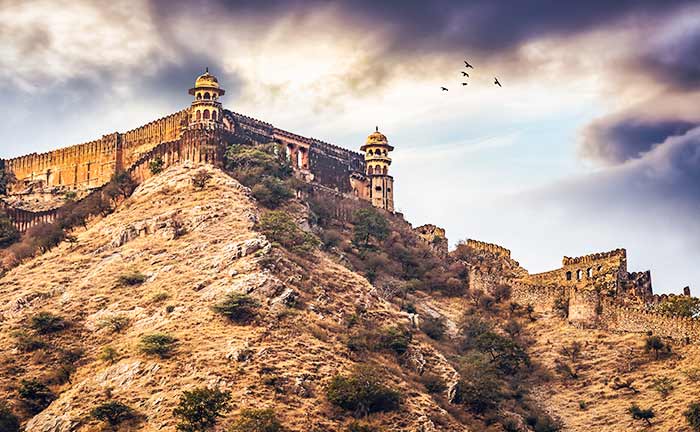 If you want to see the glaring history in your eyes instead of getting lost in the pages of history books and internet surfing, you should go to Rajasthan. Once you be in Rajasthan visiting those Palaces, Havelis and Forts, you will feel as if you have stepped into that bygone era of India that has treasured up the untold stories of the valor and glory of Maharajas, architectural marvels along with some bitter truth of vicious wars and resulted suffering, killings, loots and plunders of Invaders and other rulers.

Jaigarh fort is located in close proximity to Amer Fort and the Maota Lake. Jaigarh fort is situated in a raised mass of land projected into a lowland well known as the CheelkaTeela (Hill of Eagles) of the Aravalli mountain range.This fort was the frontier defense bastion of the Amer fort and its palace complex. It was built by Jai Singh-II in 1726, thus the name of this fort was given after him i.e., Jaigarh which means Victory fort(Jai means victory and Garh means fort). Irrespective of where you are in Amer fort, you can see the endless red huge wall of Jaigarh. The fort, however, is made up of sandstones with a length of 3 kms stretching along the north–south direction with a width of 1 kms and elevated at about 400 meters above the Amer Fort.

Talking about the history, Jaigarh fort used to be the place of cannon foundry and famous for producing world-class cannons at that time. The fact is that this place was rich in iron ore which provided the important metal(i.e., Iron) for making cannons. Jaivana, world’s largest cannon, was made here in 1720. The barrel has a diameter of 11 inches (280 mm) and is adorned with the carving of trees, elephant scroll and a pair of ducks. It has a range of 22 miles (approximately 35 kms) and used 50 kgs ball to fire. It was tested only once using 100 kgs of gunpowder which fired covering a distance about 35 kms.

It provides a breathtaking panoramic view of Aravali hill and the Amer Fort. You can see the entire city of Jaipur known as the ‘Pink city” form the top of it. The noteworthy edifices in the fort complex are Laxmi Vilas, Lalit Mandir, Vilas Mandir and Aram Mandir, a museum and an armory. It’s worth paying a visit to those temples especially the museum and the armory. The museum exhibits many photographs and paintings of Royalty, antique artifacts, a circular pack of cards and the hand drawn plan of palaces and fort. The armory displays guns, swords, muskets, armor and artilleries(a 50 kg cannon ball) along with the pictures of some popular Maharajas of Jaipur.

This fort was used as an artillery warehouse where world’s largest cannon-on-wheel named "Jaivana" was manufactured. The irony is that even after being built here, this cannon had never been used in any battle, but today it has become the main attraction of the fort which is being served as a selfie point to take pictures.

Main attractions in the city

You can find a beautiful square garden known as Charbagh garden inside the fort complex where you can spend some time after a tiring walk. A marvelous view of surrounding landscape can be captured from the central watch tower. On the North side of the fort complex, you can get to the triple arched entrance known as the “AwaniDarwaza" which will lead you to the Aram Mandir and a garden within its courtyard. You can get an amazing view of Sagar Lake, an artificial lake from where water was being transported to the fort for various usages. The triple arched entrance has a wall above it painted with red and yellow and facing towards the west with an east–west orientation.

The water conservation model was phenomenal which has the potential of even solving the problem of today's water crisis. As the fort was located on the Aravalli mountain range, so they used to harvest the rainwater or spring water by channeling it through a canal to the three underground tanks built below the central courtyard. The largest tank has the capacity of holding 6 million gallons of water!

There was a rumor of treasure, belonged to the Kachwaha rulers of Amer, being buried under the water tank which, later, resulted in a futile search. The search was carried out during the Emergency declared by the then Prime Minister, Indira Gandhi in 1977. But all their action of searching for the mysterious and precious treasure went in vain.

If you are starting your journey to Jaigarh fort from Jaipur city which is about 10 kms far in Jaipur-Delhi Highway, you can reach to Jaivana cannon at the “DungarDarwaza” or the Dungarhgate(“Darwaza” means gate). One can also reach to this fort through Amer fort after having a walk along the steep hill track which will leave you at the Awami Gate near the fort museum.

The Jaigarh fort and Amer fort are actually interconnected by many secret tunnels out of which, one is now opened for tourists so that they can have a walk to Jaigarh fort from Amer Palace and back again easily.

Jaigarh fort is quite interesting and engrossing place in Jaipur. It would be easy and more informative if you get accompanied by a local guide who can explain each and every detail and can tell you more about the history and significance attached to the fort and palaces. However, you should take your food, water and drinks with you as you will have to walk a lot.

If you are in the Pink City, it’s worth a visit to this place which is not so far from it.