An ancient architectural marvel, this monument will take you back in time with its rich history and amazing construction. 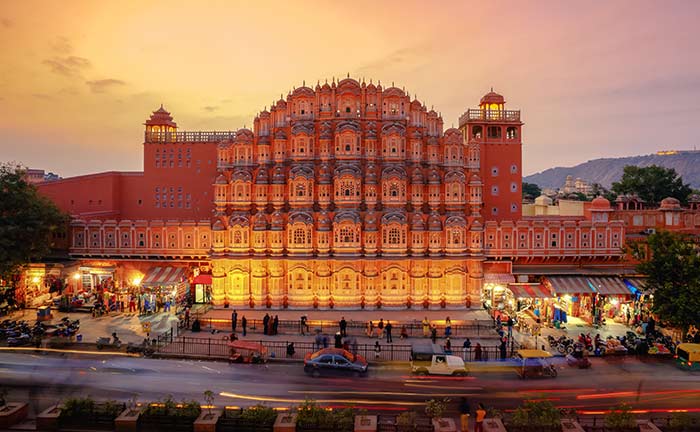 Erected magnificently in red and pink sandstone, in the midst of the pink city as what it is called, Jaipur, Hawa Mahal is known to be The Palace of Winds or The Palace of Breeze. It is the historic heritage of the Rajputanas ruling in the 18th century which till date stands as the noteworthy gem of architecture of Rajputanas. The architectural beauty is the extension of the royal palace built for a sensitive yet gifted reason for the ladies of the Rajput dynasty. When looked from the façade, it appears to the people as if it is the front side of the palace, but technically it is the back end of the palace. The description of the palace of winds, can be fairly put into words through one’s eyes who see it.

Hawamahal was built in 1799 to be specific, at the time of Maharaja Sawai Pratap Singh, who was charmed by the structure of Khetri mahal. It was designed by Lal Chand Ustad with extreme uniqueness as it was meant to be. Following the purdah system during the Rajput rule, women weren’t allowed to appear in public or to be seen by other men or without the face coverings. Hence, they were denied participating or either watching any activities held outside the palace. To this inconvenience Maharaja Sawai Pratap Singh decided to put up a construction for the ladies to envision and enjoy the parades,processions and events during the festive occasions. It sits at the end of the palace and outspreads to the women’s chambers or the Zenana.

The palace is a five storied pyramidal shaped building built in the form of Lord Krishna’s crown as Maharaja Sawai Pratap Singh was a devotee with passion of Lord Krishna. The architecture of the building insights us of the mixed culture of the Hindu Rajputs and Mughals also resembling a beautiful honeycomb of bee hive. The first floor of the palace is knownas the Sharad mandir where the autumn celebrations of the palace take place. The second floor being Ratan mandir where we get to observe the flamboyantglass works. The top three floors are called the Vichitra mandir, Hawa mandir and the Prakash mandir. The Prakash mandir leads to the openings of the terrace from both the sides whereas the Vichitra mandir is a place of worship to Lord Krishna by theMaharaja. The first two floors are courtyards where as the top three floors are of a single room design.We can observe that there are no staircase to the upper floors of the Hawa mahal but only ramps for the palanquins of the Rajput women in the palace.

It rises 50 feet above the land and is beautifully blended with 958 windows or jharokhas, lattice shaped and representing semi octagonal shapes mostly madeof wood and sand stone. The Rajput architecture is visible in the grooved pillars, floral patterns and hanging canopies while the Mughal architecture is significant in the steep arches and stone tile filigree work. The blend of the both the dynasties show the rich culture even though poles diversified acting together to result in a masterpiece. Each jharokha is a small window for one lady to sit and watch the processions in content and bliss. The windows are constructed such that this place is circulated with cool breeze through the pipes making it comfortable at any time of the year due to the Doctor or Venturi effect. There are fountains in the interior of the mahal in the middle of each chamber complementing the cooling effect and light breezes through the jharokhas.

Although the exteriors of the Hawa mahal signify a complex yet enthralled architecture, the interiors happen to be quite simple in their design. The Hawa mahal is surrounded by three two-storied large courtyards on western, northern and southern sides with it being on the Eastern side of the palace. There are captivating passages and pillars leading to the top stories of the mahal as they can only be reached by ramps. There is a majestic door having us leading in to the entrance of the exuberating Palace of The Winds.

A museum is present in the interior of the palace showcasing most of the heritage and wealth of the Rajput lifestyle. The ancient artefacts preserved in the museum denotes the rich culture, heritage and traditions of the Rajput and Hindu culture.

The best time to visit the Hawa mahal is between October and March due to the scorching heat of state Rajasthan granting it would never be bad to have a vacation of a day or two whenever interested. Hawa Mahal has its best view at time of sunrise. When the early rays of rising sun fall on the walls of the Hawa mahal, it glows goldenwith its gorgeous phoenix rising from the fire. The beauty gets smitten any one coming to watch it.

The Palace of Winds, lies as the marked picture of Rajasthan. There are almost all ways air, rail and road to reach the destination. It attracts the tourists from all over the worlds and lures them to the place who witness an eye striking work of Indian construction talent. The visions of this masterpiece make it one of the leading historical monuments in Rajasthan as well as in India, when spectacled leaves everyone amazed.