Amazing architecture of this palace will leave you spellbound with an experience of a lifetime. 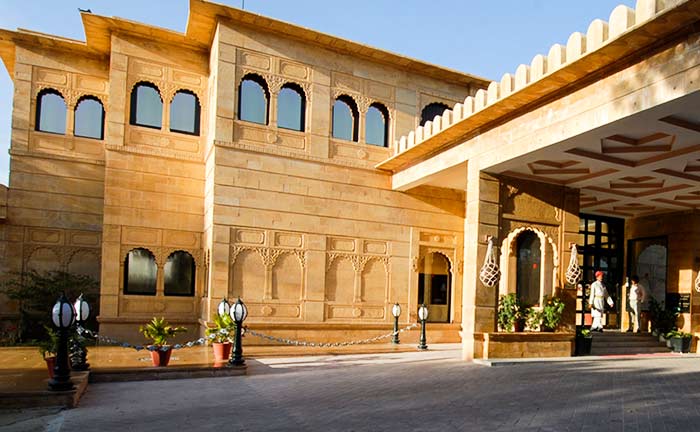 Gorbandh Palace is one the oldest palaces of HRH group, lying is outskirts of main Jaisalmer city the palace gives a picturesque view of the desert and the famous Jaisalmer Fort.

The name Gorbandh is a derived from the tradition followed by Rajasthani women of weaving a Gorbandh with materials such as shell, beads, buttons for the camels which belonged to their husbands.

Royal look of the palace and its typical Rajasthani folk décor has been serving as eye candy for many tourists. The ambiance including its structure as well as rooms and dining all gives a vibe of royal life and this definitely an experience of a lifetime for the visitors.

Gorbandh palace is famous for its authenticity and hence it has many restaurants which are specific for different cuisines and occasions. Rasoda which means the kitchen is a multi-cuisine restaurant. This restaurant serves Chinese, Indian, continental and Rajasthani cuisines to their guests.

The hotel has a well accomplishes and open-air restaurant where all kinds of parties and get together are hosted. The restaurant since located in a garden the name of the restaurant is Bagicha which is Hindi name of the garden.

The palace is also famous for its “Sarovar” which is a poolside restaurant and parties can be hosted at this place in the open air and it gives a beautiful experience to the tourists.

For all guests of the hotel musical performances are hosted in its amphitheatre “Taal”, and the terrace is decorated with beautiful lights which give a magnificent view of the Jaisalmer fort in night light.

Other attractions are Jhilmil café and Safari bar of the palace which serves various different kinds of drinks to the guests of the hotel.

Hotel is busy throughout the year, but for a good experience of the other tourist’s attraction of the city one can visit anytime in between October and March as in these months the environment is cool and gives a pleasant experience.

The palace has well managed and highly accomplished 64 AC deluxe rooms with attached balcony overlooking magnificent Jaisalmer Fort and the swimming pool. Additionally, it also has 3 AC deluxe suites with king sized beds and a private bar and balcony.

The palace has open air restaurants as well as indoor restaurants and bars. Activities such as Camel safari and traditional cultural programs are organised for the guests.

How to reach the palace: