Be mesmerized by the grandeur of this world heritage site! 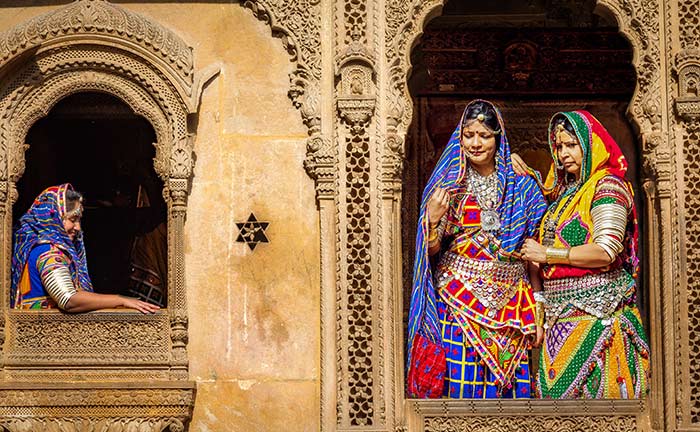 The Golden City Fort or the Jaisalmer fort is situated in the city of Jaisalmer, in the state of Rajasthan in India. The Golden city fort is still intact and strong enough that many people still live there. These people live in rented out houses or own small restaurants to earn their livelihoods. Most often, these families are descendants of the original family that built the house. or the Golden City Fort because the fort's massive yellow sandstone walls which are a tawny lion colour during the day, fade to honey-gold as the sun sets, similar to the colour of the yellow desert. It is a UNESCO World Heritage site for its rich architecture and history.

The fort is built on Trikuta Hill amongst the sands of The Great Indian Desert, the Thar Desert. Following the trend of building forts on hilltops , the Golden City Fort is built on a hill and form can be seen by almost the entire city of Jaisalmer. It was built by the Bhati Rajput leader, Rawal Jaisal,from whom Jaisalmer city and the fort derives its name. The fort was very important for international commerce because it stood at the crossroads of important trade routes including the ancient Silk Road.

As the legend goes, the fort was built by Rawal Jaisal because he was dissatisfied by an earlier fort built at Lodhruva because it was too vulnerable a location. Another legend says that he built the fort on the advice of as a wise old hermit named Easeel. Whichever is true, the new capital city of Jaisalmer was founded which was strategically a very good location to protect it from invaders.

The history of the fort turned bloody when the Mughal Emperor Alauddin Khilji attacked the fort. The bhati's were no match for the might of the emperor's family and were defeated. The women of the fort to resist enslavement committed suicide by throwing themselves into a fire pit. As his campaigns had depleted Khilji's wealth considerably, he couldn’t care for the upkeep of the fort so he abandoned it. For a few years it remained abandoned after which Bhati successor settled back in.

As the population within the city grew people started to leave the fort to migrate to other cities and states in search of other means of livelihood. Those that remained behind eventually settled in the area around the fort and most of them rely on the booming tourist industry. The people in the fort have opened up restaurants and small souvenir shops which one can take the time out to browse through and delight at the antiques.

The fort is built on Trikuta hill at a height of 250 feet above sea level. The fort has triple concentric rings of sandstone walls with the outermost wall almost being 15 ft tall and forming the base of the fort. The fort has 98 bastions out of which 92 were built in medieval times and the remaining six were built in the 19th century. The bastion forms the outer defensive wall of the fort. The wall has four entrances or gates their names being Ganesh Pol, Rang Pol, Bhoota Pol and Hava pol. The main gate had a canon near it and is 60 feet tall and carved from Indian rosewood and has a crack on it that appeared when a Hindu saint crossed the threshold.

The places one must absolutely visit while on the Golden City Fort are:

How to Reach the Jaisalmer Fort

Jaisalmer lies at a distance of 921km from New Delhi and from Jaipur about 620 km. The city is well connected with major cities by Air, Road and Railways. The local transportation in Jaisalmer is quite well developed. The Auto Rickshaw is a cheap mode of transportation and is a good way to explore the city along the way. The fort is at a walking distance from the main Jaisalmer City, but it is best to take some vehicle from the hotel or any place you are staying at.

The Golden City fort is a sight to behold during the sunrise and the sunset. The golden hue that the colour of the walls turns into, it seems as if a giant shining beacon of light is over the city of Jaisalmer. It truly is one of the places that cannot be missed.