Offering amazing sights, this fort is a must visit for all history lovers. 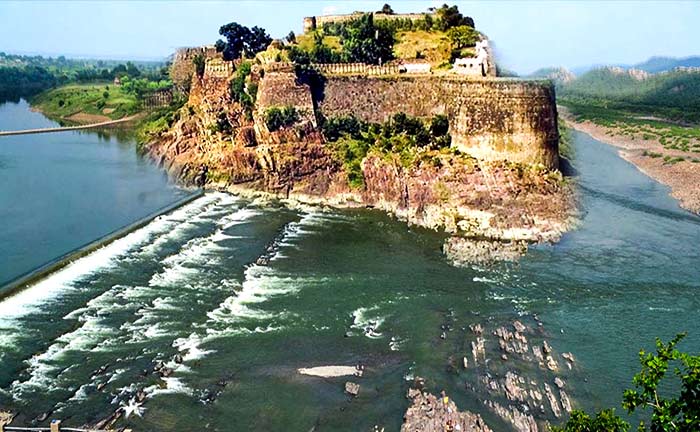 The Gagron fort is situated at the bank of the Kali Sindh river in Jhalawar Rajasthan. This Fort is surrounded by nature from all the sides, Kali Sindh river and Ahu River have surrounded the Fort from three sides and the greenery had covered the fourth side. The fort is huge so there is a chance one can get lost, that’s why it is suggested to go with a tourist guide or an informative person. Another advise will be to carry food and water as there are no restaurants nearby.

The place is very peaceful and calming, away from the noise of the city. Great place to spend some alone peaceful time or some time with close friends and family. At one end of the Fort there is a Gagron Fort watch point from where people can see the two different rivers Ahu and Kali Sindh emerging into one. The scenery from the top of fort is just too good to portray in words. One can forget all the life problems for a while, watching the magnificent scenery form there.

Along with the Battles, the place has witnessed the act of “Jauhar” twice. Jauhar is a ritual which used to be performed by Indian ladies in antient times. In this ritual all the ladies used to dress in their wedding outfits, light up a huge fire and then put themselves in the fire. There was a reason for doing this. This ritual used to be performed when the kingdom was losing a war and the opponents were coming to take over the kingdom. According to Indian culture and traditions respect and dignity are more important things for women than their lives. If they won’t perform the Jauhar ritual then they may be slaved, captured or raped by the opponents. So, to prevent that from happening they used to perform this ritual and thus burning themselves up in the fire was the way of protecting their dignity and saving themselves from the upcoming torture of life. Not only the ladies but also their daughters, even the pregnant women used to do this. The spot where this ritual was performed twice called the JauharKund is still there somewhere in the Gagron Fort. The place is even considered to be haunted by some locals.

At one side of the Fort is a Dargah of Khwaja Hamid UddinChishti. Along with Dargah there is a mosque, the gate to enter the dargah is gigantic and named as BulandDarwaza meaning Huge door. The dargah and mosque usually are little bit crowded by people going there for attending their Namaz (prayers). There is a small population around the dargah, and rest of the nearby areas are open and abandoned.

The Gagron Fort is spread across an area of about 4 sq.km. Near the watching point a bridge is constructed over the Kalisindh River and once the bridge is crossed to the other side the point is called KalisindhAnicut. From the Kalisindhanicut one can get a full view of the Huge Gagron Fort across the river. The view in itself will give you the historic feel and the point is amazing for clicking pictures. You can notice from there that the Fort is built at a great height. In antient periods Forts used to be made at certain heights as a safety precaution so that the opponents cannot get in from there. The watching point in the fort was also used in those periods for watching over the long distances to make sure there are no enemies coming.