Witness the true Rajput culture and architecture at its best! 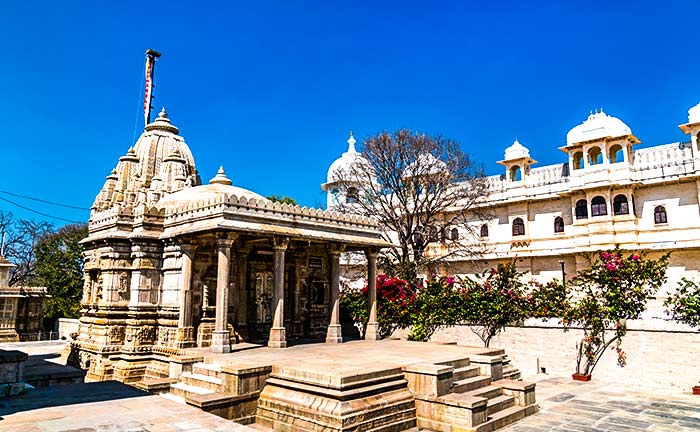 When we think of the state Rajasthan, the pictures of forts, palaces, Royal gardens, temples and desert come to our mind. This state has a lot to show to the people who haven’t encountered many astounding structures and places dating back to the bygone era.

Numerous palaces were built across many cities by the kings of Rajasthan which are called Rajmahal(King’s palace) that shows their aristocratic way of living their lives.

Fateh Prakash palace is one of the famous palace built by the king, Maharana Fateh Singh. Many of the corridors and pillars with the engravings on it are the noteworthy examples of Rajasthani architecture. It gives a hue of the art and culture of Rajasthan the king was fond of.

The palace is a double storied rectangular structure facing towards the north by its main entrance with four domes adorned the four corners of the palace which is clearly visible from a distance of 5-6 kilometers. You can also see the pillars being decorated with the golden coated vase that shines when the sun ray falls over it.

This palace was converted into a museum in 1968 and inaugurated with an objective of letting people know about the history, art, culture and architecture of Rajasthan.

It has some great collection of weapons used in war, including daggers, shields, swords, farsa, fences, axes, helmets and heirs. Besides that, you can also find the models made of clay of tribals belonging to different tribes wearing their traditional clothes. The art gallery of the museum displays some archeological discoveries and handicrafts, paintings, crystal ware, frescos(a technique of mural painting), ancient stone statues, a huge collection of wood crafts from Bassi village, post medieval statues of Jain Ambica and Indra from Rashmi village, photographs of ancient temples and monuments of Chittorgarh fort. The artifacts are categorised and kept in different rooms in the long gallery named weapon room, archaeology and sculpture room, painting room and gun room, diaramaz gallery.

You can see a magnificent statue of Lord Ganesh from Pangarh which is dated back to 8th or 9th century. While walking through the corridors, you will come across many pictures, dated back to 17th and 19th century, painted on the wall which will tell you the stories from the epics or a part of the Rajasthani Folklores.

Maharana Sajjan Singh had a large collection of crystals from F&C Osler company, England which is now well preserved in the museum. The museum of the Fateh Prakash Palace has numerous collections of antique and interesting things that might be out of your expectations such as dining tables, dressers, perfume bottles and sofa sets.

There is a huge tank known as Surajkund to the northeast of the temple of Kalika Mata. There is a myth related to this Kund(tank) that an armed warrior rode on a white horse in the morning from the Kund used to help Maharana in the war.

This fort is the mute spectator of Jauhar(it was performed by the women and queens by jumping into fire to get rid of the humiliation in case the king lost the battle) performed thrice which was started by Queen Padmini and carried forward by the Queen Karnavati.

As the Fateh Prakash Palace or the museum is inside the Chittorgarh fort which has been declared as the world heritage site by the UNESCO, it has become one of the most important tourist attractions. This fort is considered as the largest fort of India as well as in Asia. You can notice the fort being shaped like a fish, spreading over 700 acres of land. It is said that this fort was built by the rulers of Maurya empire in 7th century AD and often considered as the paragon of bravery.

If you are curious to know about art, culture, architecture(the Rajput style), living, craftsmanship of that era along with other information about war, battle and victory, then this is the place you can consider spending your time at.