Experience the royalty of Rajasthan at its best! 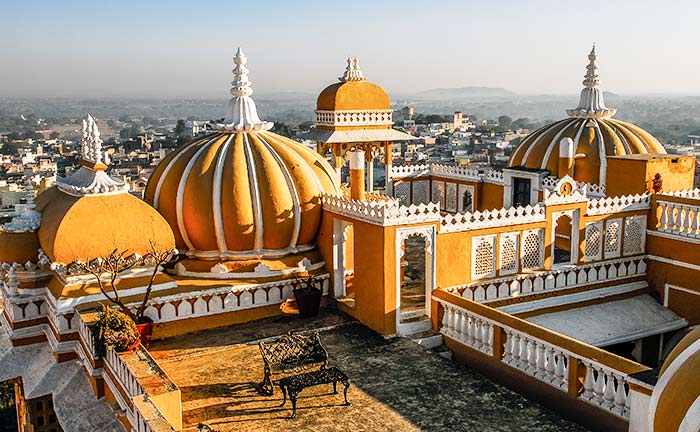 This magnificent palace is located in the city of lakes, Udaipur. Centuries old story unfolds in this royal palace which was the abode for many of the Mewar rulers of Rajasthan.

RawatDwarkaDasjibuilt the palace as his abode during the 1670s which was later turned into a heritage hotel by his predecessor Rawat Nahar Singh who is also the present owner of this palace.

The craftsmanship of the 17thcenturyis observedin the structures of the palace like turrets, jharokhas and majestic gateways. Underneath the Kacheri, where justice was served during the ruling era, is the breathtaking courtyard which is noticed just as you enter the palace near the gateway. You are welcomed with a series of narrow passages and staircases which lead you to a path of family shrines just as you enter the royal palace.

The beauty of the palace speaks about its strength and valor. The royal family still resides in the palace and manages the activities of the hotel and supervises the accommodation guests. Portraits of the rulers of the Mewar family decorates the wall of the bar which is adjoined to the courtyard.

The rooms are spacious and provide a royal ambience to the visitors. Even though the Mewar royalty is symbolized in the décor of the rooms it still provides all the modern amenities. A total of 50 rooms are available in the palace which has been converted to royal suits, studio suites, deluxe suites and deluxe rooms. Appetizing Indian, Continental and typical Mewari cuisine offered which is a must have during your stay here.

The food is prepared from homegrown fruits and vegetables which gives the flavor of the delicacies a novel experience. Ayurvedic message area and spacious dining area is provided in this Heritage hotel. The special team from kerala for Ayurvedic spa is well-trained and provides a relaxing stay. The private terraces in each room provide spectacular views of the lakes and sun-sets.

Top attractions and things to do

Just 5km away from the Deograh Mahal is the Fort Seengh Sagar which is recently converted to a luxurious villa. Guests at this fort are welcome to Deogarh Mahal for all the amenities. This is an island fortress located in the middle of the lake in the village of Manpura. This location has a pool in the center of the courtyard. This property is the proper mixture of traditional Rajasthani culture meets the stylish western culture.

There are variety activities to do during the stay at this hotel like rural Rambles, picnics, rural trails, village walks, and bird watching. Mahal terrace organizesromantic dinners which are accompanied with Rajasthani Tera Taal Dance.

As the royal family is closely associated with the functioning of the hotel, every guest is treated with great hospitality and customary Marwari culture treatment. The detailed care of the hotel staff towards the guests have set a benchmark for other Heritage hotels around Rajasthan. The rooms depict the Rajput era in all its décor like the domed ceiling which resembles Jog Maya Mahal, the temple room in each room with the family deity.

Each room resembles a different era in the Rajput Culture like Gokul Ajara, Moti Mahal and Ranjit Prakash room. The parts of the palace are divided into many wings which commemorates the past rulers of the property. It also divided as garden wing, mythology wing, temple wing, Chitrashala wing or the artist’s wing. Another portion of the palace contains 6 suits with the theme of the six seasons according to the Indian calendar is called the Sarva Ritu Vilas and they are Vasant Ritu, Grishma Ritu, Varsha Ritu, Sharat Ritu, Hemantha Ritu and Sisir Ritu.

Hotel is reachable by both railway and roadway. It is between Udaipur and Marwar Junction and it is 8km from the National Highway no. 8.