A traditional Rajasthani Fort that has stood the test of time offers you a memorable experience. 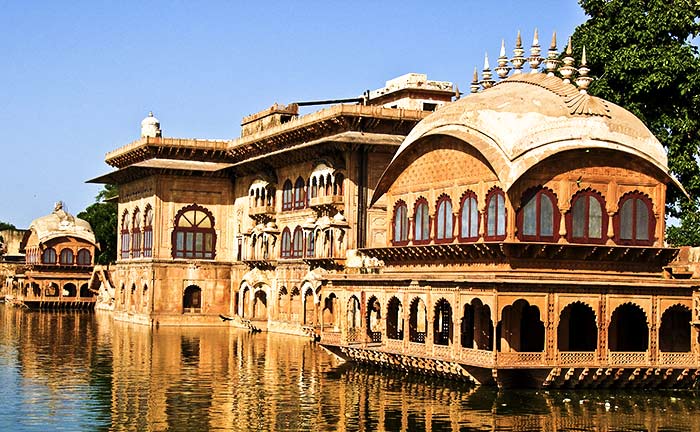 This beautiful palace once belonged to Jat king and was the capital for the Jat house. However, the credit for urbanization of the palace goes to Badal Singh who was also a virtual founder of the Jat house at Bharatpur. This beautiful palace attracts thousands of tourists every year for it’s mesmerizing green garden and the monsoon like appearance of the palace. This appearance is created by installing plenty of fountains within the area and also installing special techniques which produces thunder like sound around the pavilion.

The beauty of this palace is mesmerizing as the Jat rulers were very much influenced by the Mughal architecture skills in Agra and Delhi and hence they decided to replicate those in their own palace and the result is sure to take your breath away. The gardens are inspired by the famous Charbagh. The fountains that are installed in the garden areas also had a significance of lowering down the temperature during summers. The thinking was beyond it’s time for such a marvelous thing to be created.

The monsoon pavilion, which is a single storeyed palace and had hundreds of fountains over the pavilion's canals. During Holi, which is one of the most celebrated Indian festival after Diwali, organic color was mixed in the water tank through which the fountains are connected. As the water passes by the fountains would spout colored water which is a very beautiful view to look at. The Deeg palace is very famous for it’s monsoon like appearance as there are plenty of fountains and thunder sound making machines to give full effect of the season. There are metal balls are set up on the roof which are set to roll by the water pressure creating a thunder like sound throughout the year.

The palace is huge and requires at least 2-3 hours just to admire its beauty and elegance. The interiors are worth taking pictures of and can give you a perfect royal feel. The palace opens at around 9 am in the morning.

There are guides available in the area who can explain you better about the place and it’s history which is quite significant as the palace has seen a lot of battles in the past. The most legendary battle that was fought was between the Jats and the Mughals and Marathas combined. For eight consecutive years the Jats kept winning the battle even in the enemy territory. The battles fought by the Jats marked their name in the brave history of Indian battles and brought up their name on the top of it.

The Deeg palace holds not just a breath-taking view of its interiors and exteriors but also a deep hidden secret of battles as well. The exterior walls speak a thousand words for themselves and what better way could possibly be there to judge it by seeing it. The king's room holds a deep secret within itself. The huge bed which is the part of the king’s room, was previously used as a part of death rites and was used to wash up dead bodies after the death. There are plenty more secrets hidden in the rooms which might be better told by the local guides there who are available at a reasonable rate and can tour you around the place in a much more interesting manner.

Visiting this palace can bring out a sense of peace within you as the surroundings are extremely calm and composed. People have often commented on how elegant and mesmerizing this palace is and mostly visit this place due to this very reason. In fact, even in summers the temperature won’t raise much within the palace arena due to hundreds of fountains in the picture. This place is perfect for those visitors who love intricate architectural work and have a deep interest in history of monuments. This place is sure to leave you speechless and will make you want to visit it again and again as the beauty speaks for itself but the beauty to this place is beyond expectations.

Although the palace is situated in Deeg, Rajasthan but the place is quite nearby to Delhi and Agra. If one is traveling by air, then the nearest airport is in Agra which is around 70 km away and the next nearby airport is in Delhi which is 200km away. If one wishes to travel by railways, then the nearest railway station is Bharatpur junction which is around 35km away from the palace. The transportation facilities are plenty if one wants to visit this place and enjoy its beauty. Traveling by road can also be an option here, it takes only two hours from Agra and merely an hour from Mathura.