An amazing place that you will truly love to spend some time at and enjoy to your heart’s content. 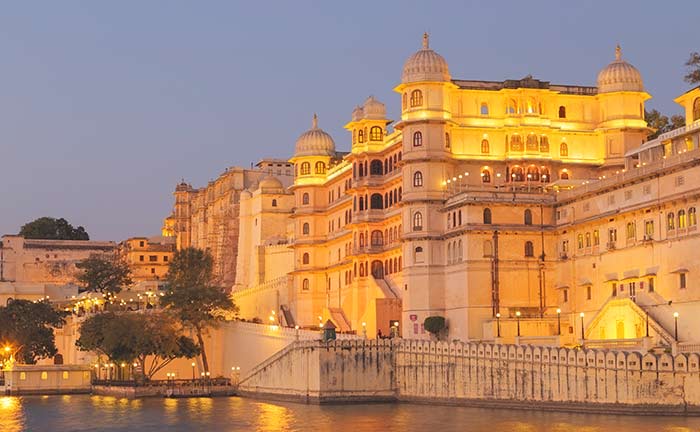 The lake view City Palace is situated at the ridge of the lake Pichola in Udaipur, Rajasthan. It is not far from the city so you can take a cab or any other vehicle to reach there by road. The city is nearly 30-40 kms away from the Maharana Pratap International Airport, which will be a 1-hour ride approximately.

The City Palace is as old as the city itself. The construction of this palace was started at the time of establishment of the city Udaipur. The city was named after the king who established it i.e. MaharanaUdai Singh II. This palace used to be place form where the kingdom was ruled and administrated. The current owners of the palace are Arvind Singh Mewar and Mahendra Singh Mewar. Some parts of the Palace have been turned into hotels.

It took approximately a whole century to build this palace, just imagine how wonderful and minutely detailed design will the architecture of the palace have. Along with the huge palace there are other small 11 palaces spread over the area. The main entrance gate is the Tripola gate meaning Triple Gate and you will know why it is named so once you see it. After the entrance comes the SurajGokhda, this is the place where the kings used to communicate and give speeches to their followers. Then comes the MorChowk, this is a courtyard with black and with flooring and colourful artistic walls.

On a wall there are three framed art pieces showing images of Peacocks, those art pieces are made from small colourful pieces of glass and mirror. The MorChowk is named after the Hindi word Mor meaning peacocks and Chowk meaning courtyard. Then there is a DilkhushaMahal, the word Dilkhush means happiness of the heart and the place in named so because it does so. It is full of art and culture, there are wall paintings, mirror works and combinations of different art forms which never fails to impress the visitor’s heart.

There is a Sheesh Mahal in the Palace which was made for the Queen of Maharana Pratap Singh. That place is entirely covered in Mirror and glass. Every inch of every wall, ceiling and even the floor is covered with pieces of colourful glass and mirrors. The ceiling is Dome shaped and given the design like a giant flower. There is a giant framed mirror on each wall of the room. A glass painting depicting an elephant ride of King and Queen with people gathered around it and a small mirror frame on either side of the big frame of the front wall. A horizontal zigzag design with orange glass and mirror is made on the rest of the wall. The ceiling is a giant mirror. There is a restaurant at the terrace of the City hall from where one can enjoy the food with the lake view and view of sunset at evening time. On the other side, the whole city of Udaipur can be viewed from there.

There is a place in the Palace where Elephants fight were conducted in antient times, this is the way in which elephants were selected to take in the war. There is also a Moti Mahal in the Palace, Moti meaning Pearls. There are two Chitrashalas where some amazing portraits, paintings and artefacts are displayed.

The Fateh Prakash Palace a part of the City Palace which has been converted into a 5-star luxury hotel. Within the Fateh Prakash Palace there is a Crystal Gallery which displays objects made from crystals like chairs chandeliers and many other stuffs. Also, there is a Darbar Hall in there which was used in the old times for official meetings, gatherings and other functions. Whatever meetings and discussions used to happen in the Darbar Hall, Royal Ladies used to watch them form the Galleries of the Hall.

Along with the royal significance the hall was royally decorated too. It has beautiful and huge Chandeliers hanging form the ceilings, Royal chairs and tables, the other weapons and beautifully designed Swords are displayed on the walls, some portraits of the royalties or portraits depicting their stories are also displayed on walls. The Hall is called the Darbar Hall now but during its construction it was called Minto Hall which was named after Lord Minto who was the British Governor head of India and he was the one who laid the foundation stone of this Hall. There are separate charges besides the Palace to visit these places in Fateh Prakash Palace.

There are Boat ride facilities at the city palace, where you can take a tour of the Pichola Lake and get a complete view of the palace from the lake. There are special boat ride packages available for sunset boat rides. The palace looks beautiful and magical from the lake side during the daytime as well as in evening time when one can see it decorated with lights. There are cargo boats facility also which are available for rent on an hourly basis.

There is a sound and light show held every evening at the ManakChowk in City Palace. This show is conducted by the Mewar family and it depicts the antient history of the Mewar family. The show is conducted in 2 languages, those are Hindi and English. The locals prefer watching the show in Hindi but for foreigners who don’t understand the language can watch the English Show. The Title of the Show is “YashkiDarohar” in Hindi and “The Legacy of Honour” in English. The show is divided into Two parts. The two parts are “Hathnal Ki Chandani” and “ManakChowk”. The show is a must watch if one wants to understand the Mewar culture and its history.