An ancient architectural marvel displaying the olden glory of Rajasthan at its best. 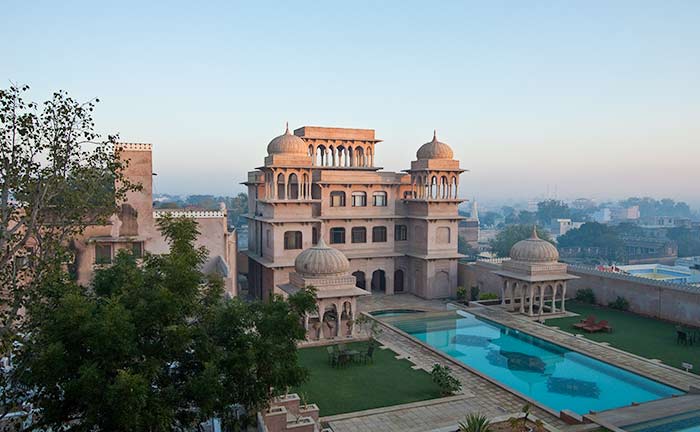 Located in the heart of the Aravali hills is the small town of Mandawa. Mandawa is a small beautiful town situated in the hub and the centre of the Shikhawati region of Rajasthan. The modest town of Mandawa is known for its havelis and forts. Because of its historic monuments, the town is also a famous shooting site for many Bollywood movies. Found in the 18th century Mandawa like the town itself has a very smooth and transparent history. It was founded by Mandujat and later was taken over by the Rajput rulers.

One of the alluring and eye-catching monument of Mandawa is the Mandawa fort or Castle Mandawa. Castle Mandawa is not only an important historical site of the town but also of the state of Rajasthan. The fort was built in the 18th century along with other historical sites. It was built by Nawal Singh who was the first direct descendent of the Shekhawati rulers. Because of the construction of the fort a township was able to set up in the town of Mandawa.

The fort of Mandawa not only attracts tourists because of its historical importance but also because of its scenic and beautiful architecture and paintings that depict a certain theme both inside and outside the castle. At the entrance of the fort is an elegant and an admirable painted arch. Most of the paintings both inside and out outside of the castle depict lord Krishna and Radha. Along with the painting the fort also boasts of its intrinsic and delicate mirror work. Through its medieval charm the fort takes one back in the 18th century.

The interior of the castle is the same as it was back in the day. With antique collection from the Rajputana era, painting depicting various themes and its tranquilising mirror work, the fort is the perfect example of the then and the current Rajputana and Shekhawati culture and traditions. The best time to visit the historical site is from the months of October to march. Though the Mandawa fort has been converted into a heritage hotel, it has not lost its magical touch of the Rajputana era.

The fort also stands strong as a symbol of Rajasthan’s heritage and the vibrant culture. The castle has also been given the name of “open art galleries” because of the various paintings present inside the fort that are sure to turn heads around because of their beauty and intrinsic art work and designs. In conclusion the Mandawa fort or the Castle Mandawa is a must watch tourist destination and it also is historically significant not only for the town of Mandawa but for all of Rajasthan. Castle Mandawa acts as a magnet and allures people with its architectural beauty and leaves them both amazed and charmed. Castle Mandawa is a fusion of royal and rustic.