Acknowledge the splendor of Chhattar Mahal in Bundi 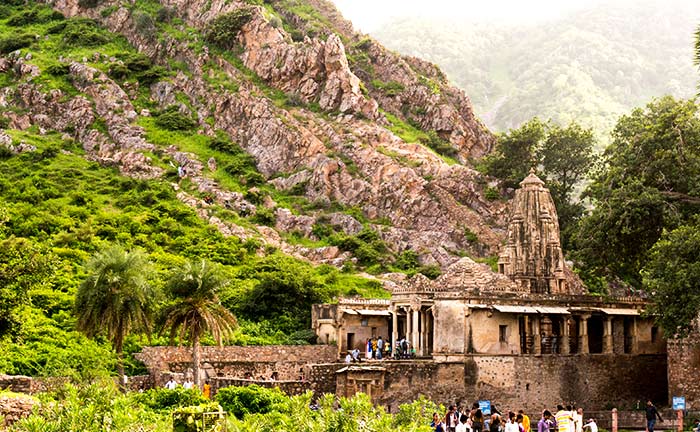 Recognized as the most haunted place in the country, Bhangarh fort is situated in Alwar district of Rajasthan. At the edge of the Sariska Tiger reserve, is where it is precisely located, the village around it is scarcely remote. The most interesting fact about the Bhangarh fort are the mythical and paranormal stories associated with the fort which may have been noticed by some or made up by others.

The history of Bhangarh fort goes back to17th century during the rule of King Akbar. It was assumed to be built by Man Singh 1, one of the court men also called Navarathnas of Akbar’s palace for his brother Madho Singh 1 in 1793 AD.The ruins of the palace sit at the foot of slope terrains with a pond surrounded by trees and a natural stream of water falling into the pond in the fort premises.

The Archeological Survey of India, the body that is responsible for the preserving the historical monuments of India has put up an ASI marked board at the starting of the fort stating the entry is restricted before sunrise and after sunset into the Bhangarh fort which is usually put at the haunted places in India.

The tales behind the haunting of Bhangarh fort goes in two different directions with narration of two different stories. One detailing about a holy sadhu’s (priest) curse of anger resulting in collapse of the fort and the dynasty alongwith the villagers who vanished and the second one being a tantric (person performing dark magic) well versedin occult and dark magic who jinxed the fort to destruction. There go many tracks to these stories changing the facts and myths from one person to another. But the most perceived stories can be stated as such.

There lived a sadhu Guru Balu Nath on the hills in the area where Bhangarh fort was to be built. Consulting with the holy sadhu about the construction, Raja Bhagwant Singh, father of Madho Singh and Man Singh gave orders to put the foundation for the fort agreeing to the condition put forth by sadhu Balu Nath. The condition was that the shadows of the palace should not fall or cover the home of sadhu Balu Nath, if done so the fort would be ruined to shreds. The Bhangarh fort was built in accordance with the condition put forth by the sadhu up to a certain limit but eventually the king started neglecting the sadhu’s words and the fort kept expanding until the extent where the shadows reached the sadhu’s home. That was when the sadhu Balu Nath cursed the doom of the kingdom, hence it was destroyed and eventually the village around slowly was abandoned. It was rumored that after the fall of the fort trials were made to reconstruct but the roofs always collapsed and no houses were further built.

The Tantric’s curse holds the responsibility of the shambling of Bhangarh fort according to some legends. Princess Ratnavati was the daughter of Chatr Singh who was spoken of, as the jewel of Rajasthan. Suitors from all over the country wanted to woo her in marriage and just then a tantric versed with black magic fell in love with the princess at the sight of her. But he was certain of the fact that it would be impossible to attain her. The tantric hence planned the use of black magic in persuasion of owning her. As he recognized the princess’s fascination for perfumes from the market, he cast a potion spell on the perfume bought for the princess to attain her love. Ultimately the princess got aware of his intentions and crashed the bottle which turned to a boulder and the tantric was killed under it. In the moments before he took his last breath, the tantric cursed the kingdom, villagers and the princess to death. Later in days, the kingdom was invaded by the Mughal emperors and fell as bait, where, as told by folklores all the people of the fort as well as the princess perished. The fort is assumed to be haunted by the tantric’s ghost till date and is anticipated that princess will be reborn in the palace then will the ghost of tantric be gone.

There are many presumed stories about incidents happening in and around Bhangarh fort during the dark hours. According to some locals many young groups of students went into the fort after the sunset fort to discover the place after bribing the security in spite of prior warnings but never came back. Also, reportedly who have come back died in some or the other disaster before sunrise. Also, people have been hearing cries of women, music from rooms or have seen paranormal activities in and around. They could be rumors or occurred incidents, but no one has been able to prove or come to any conclusions yet. Even though the ASI prevents from going inside before 6 am or after 6 pm.

The happenings or the so told, do not deterthe tourists or the brave hearts from going since it is safest during the day to have an eventful and exciting day. The stories create hype about the region with dwelling tourists especially during the non-summer season. The adventurous trip to Bhangarh fort is worth experiencing with friends especially keeping in mind the limitations. Since India is a mythical country every historical place is worth visiting.