Be apart of the royal heritage of Rajasthan

Be apart of the royal heritage of Rajasthan with some amazing sights on offer at this grand fort. 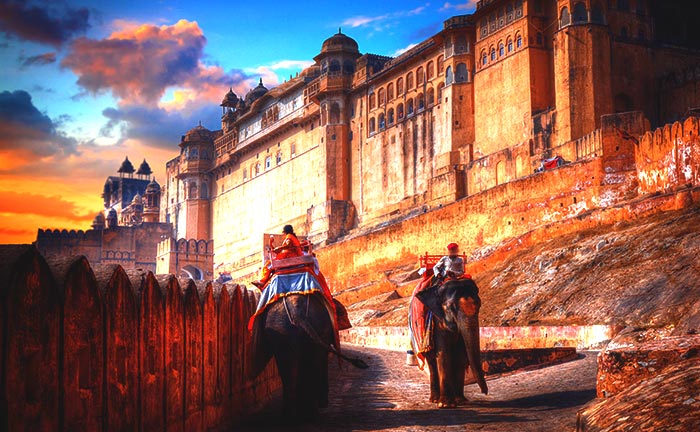 Amer fort, also referred as Amber Palace is situated in Amer, Rajasthan. It is 11 km from the main city of Jaipur, is one of the major tourist attractions. It was constructed by Raja Man Singh and is known for its scenic marvel. It is positioned on top an easily scalable mountain, situated right next to the Maota Lake. Together the fort’s magnificence appearance and the position, caters for a special to visit. A fascinating mix of Hindu and Muslim architecture can be witnessed. The whole thing is built of red sandstone and white marble. The palace inside the apartments consists of very attractive apartments. This was built by Raja Man Singh, Mirza Raja Jai Singh and also Sawai Jai Singh, over two centuries. The complex inside the palace was utilised as the main residence of Rajput Maharajas for a long time. The amber fort is very closely associated with the rich history, involving treachery and bloodshed.

Raja Man Singh of Kachwaha house took over from his predecessor in the early years of 1600. Then he destroyed the whole structure and started building a new one. Later the fort was again developed by his successor Jai Singh. The continuous process of renovations and improvisations continued for many decades. The present-day fort was completed in the late 16th century. In 1727, this got shifted to their capital, from Amer in Jaipur, no added transformations.

Raja Man Singh of Kachwaha house took over from his predecessor in the early years of 1600. Then he destroyed the whole structure and started building a new one. Later the fort was again developed by his successor Jai Singh. The continuous process of renovations and improvisations continued for many decades. The present-day fort was completed in the late 16th century. In 1727, this got shifted to their capital, from Amer in Jaipur, no added transformations.

The fort started with its construction in 1592. It got modified in regular intervals by many kings and the fashion of the same kept on continuing up until late 1600. The whole construction was based on keeping the kings satisfied. There is also present one more palace, which got constructed before the construction of Amber Fort. This one is located on a valley behind the fort and is one of the oldest in India.

The fort consists of four different sections, each having its own gate and a courtyard. The initial one is known as Suraj Pol or Sun Gate. Diwan-e-Am is adorned with pillared hall and a two-tiered gateway, named Ganesh Pol. The entrance of the Amber Fort is through the Dil-e-Aaram Garden, which is present there in the traditional Mughal style. A flight of stairs goes to Diwan-e-Am (public audience hall), comprising of latticed galleries and double rowed columns. Each one of them have a capital in elephant’s shape, on top. The doors are made of Silver.

The other courtyard comprises of two splendid looking buildings, positioned opposite to each other. One the right side is the famous Sheesh Mahal, and on the left is the beautiful Jai Mandir. They were collectively known as ‘Zenana’. This part of the whole palace was completely separate, as the kings visited their mistresses and queens, without being noticed by any individual.

As mentioned earlier, the architectural style of the fort is a mix of Moghul and the Rajput. One of the best example is the Ganesh Pol. The gate is embedded with mosaics, thus making it look colourful and grand. Then follows the Jai Mandir and Sheesh Mahal. While Jai Mandir is intricately carved with ‘jali’ screen and stucco work, the walls of the Sheesh Mahal was inlaid with exquisite mirrors. Jai Mandir has a big opening, covered with sandalwood doors. The special features, are the water flowing through the building, thus catering for an air-conditioned effect!

The mirrors in Sheesh Mahal were convex ones, and the whole thing was constructed during the reign of Raja Man Singh, in the late 1600s.

The major attraction lies in the magic Flower, Man Singh’s palace and the huge colourful garden. Whilst the Magic Flower depicts the two hovering butterflies, the whole palace is famous for its pavilion. The colourful garden resembles the Chahar Bagh or the well-known Mughal Garden. The star-shaped pool lies at the center of the garden. Due to the kings’ visiting the mistress and the queens, the place needed a special design. The walls of Amber Fort is decorated with paintings of war and hunting, along with the precious stones and mirrors. In front of the Amber fort is the Maota Lake, giving a spectacular and lovely reflections of the fort’s magnificence.

Upkeep of the Fort

Amber Fort, along with other five forts of Rajasthan, was listed as one of the UNESCO World Heritage Sites. The ADMA (Amer Development of Management Authority) has spent about 40 crore rupees in order to keep the fort safe from the external damages and threats.