Get drenched in colors of happiness by taking part in Holi 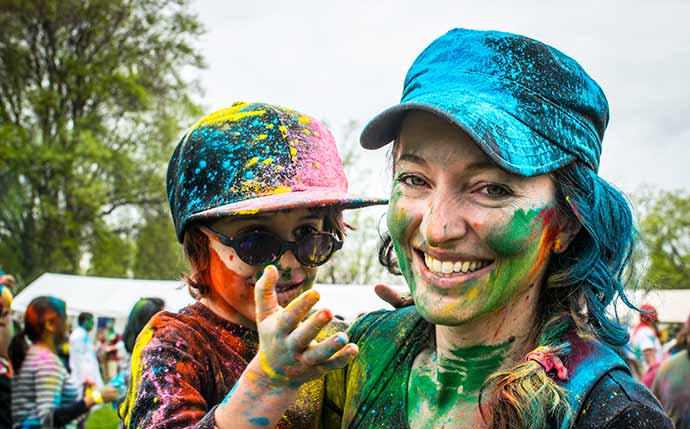 Holi is an important festival celebrated in India. It holds religious as well as seasonal importance in the lives of people. In the religious context, it signifies the victory of good over evil while as per the seasons, it marks the end of the winter season and the beginning of the spring season. Irrespective of the reason behind its celebration, the festival spreads the message of brotherhood, friendship, and love. It is believed to be a harbinger of happiness. During this festival, people belonging to all age-groups indulge in the fun by smearing colors on each other and playing with water. That’s why Holi is also identified as the “Festival of Colors”. Holi is celebrated on the full moon day in Phalgun month as per the Hindu calendar, which usually falls in the month of March according to the Gregorian calendar. The festival is observed in different ways in different parts of India. It is identified by different names in different regions. In India, the most distinguished celebrations of Holi are hosted in Braj region, including places like Mathura, Vrindavan, Barsana, Nandgaon, etc. in Uttar Pradesh. One can also enjoy Holi in Jaipur (Rajasthan), Hampi (Karnataka), Shantiniketan (West Bengal), Punjab, Delhi, etc. Even though the festival is of Indian origin, it is celebrated in many countries all across the world. The countries where Holi celebrations are observed include Nepal, Bangladesh, Suriname, Canada, Australia, etc.

Just like the way of celebrating the festival varies from one region to another, the reason behind its celebration also varies. The most popular one is Vishnu legend, which indicates that the festival exemplifies the victory of good over evil in the honor of Lord Vishnu and his devotee Prahlad. The legend states that there was a demon king named Hiranyakashipu, who was a holder of 5 special powers, i.e. he could neither be killed by a human being nor an animal, neither indoors nor outdoors, neither during the day nor at night, neither by astra (projectile weapons) nor by any shastra (handheld weapons), and neither on land nor in water or air. The same fact attributed to his arrogance and his belief that he was God himself. He expected everyone to worship him only. However, his son didn’t agree with his point of view as he was a devout follower of Lord Vishnu. This bothered the king a lot. The king tried punishing Prahlad several times but to no gain. Eventually, Prahlad’s evil aunt, Holika convinced him to sit with her on a pyre. She covered herself with a special cloak, which made her unlikely to catch fire while Prahlad was prone to fire. As the fire raged, the cloak flew away and covered Prahlad. As a result, Holika was burnt to ashes while Prahlad was all well. Lord Vishnu who is known for restoring Dharma appeared in the form of Narasimha - half human and half lion (which is neither a human nor an animal), at dusk (when it was neither day nor night), took Hiranyakashipu at a doorstep (which was neither indoors nor outdoors), placed him on his lap (which was neither land, water nor air), and then disemboweled and killed the king with his lion claws (which were neither a handheld weapon nor a launched weapon). That’s why Holi represents the triumph of good over evil, similar to that to Prahlad over Hiranyakashipu.

In addition to this legend, there are various other legends widespread for the celebration of the festival of colors. It is also said that a few people observe Holi as a harvest festival and celebrate good spring harvests and fertility of the land. While it is believed by others that Holi demonstrates the end of the winter season and the onset of the spring season or New Year.

Holi is celebrated for two consecutive days. The celebrations of Holi initiate from the full moon night when people perform rituals in front of a bonfire. The night is identified as Holika Dahan. The bonfire is lit using dry firewood. The bonfire signifies Holika, the evil sister of Hiranyakashipu. The burning of bonfire indicates the victory of good over evil. This ceremony usually takes place after the sunset. People pray for the happiness and wellness of their dear ones by performing this ritual. The major celebration takes place on the day succeeding the full moon night, which is known as Dhulandi or Rangwali Holi. On this day, people gather at a place with their friends, relatives, neighbors, etc. to smear color on each other. Colored water is also used to play Holi. Children like to play with water-filled balloons and pichkaris (water guns). Many parties are organized in which people sing, dance and have fun. Bhang (a drink prepared from the cannabis) is a signature drink of Holi. Other delicacies consumed on the occasion of Holi include mathri, gujiya, malpua, ghewar, etc. As a whole, Holi is a fun-filled festival during which people indulge in merrymaking and forget about their differences and worries.

Join in the festivities of Holi in India

Holi is celebrated to represent the victory of goodness over evil. Moreover, it is observed as a festival of love, brotherhood and forgiveness.

Different traditions are followed in different parts of the country to celebrate Holi. While some play it with colors and water, others play it with flowers. Lathmar Holi played in Barsana and Nandgaon of Uttar Pradesh is also a unique tradition.

People play Holi, irrespective of their age, class and gender. People smear gulal (colored powder) on each other and wish each other happiness and well-being. They also play with water. Children like to play with pichkaris (water guns).

There are several stories prevalent behind the celebration of Holi. The most popular of them is Vishnu legend. There used to be a king named Hiranyakashipu, who was blessed with 5 special powers. He became an arrogant man owing to his powers and wanted everyone to worship him as God. But his son Prahlad didn’t abide by his saying. He often used to punish him but never achieved anything. Her evil sister tricked Prahlad to sit with her on a pyre. She was covered in a special cloak, protecting her from fire while Prahlad was unprotected. The cloak flew away from her and covered Prahlad, which resulted into the burning of Holika. Later, Lord Vishnu took an incarnation of Narasimha and killed Hiranyakashipu. Hence, the festival is celebrated as a victory of goodness over evil, similar to that of Prahlad over his evil father.