The most awaited festival of Jaipur.

Get to know about one of the most awaited festival of Jaipur. 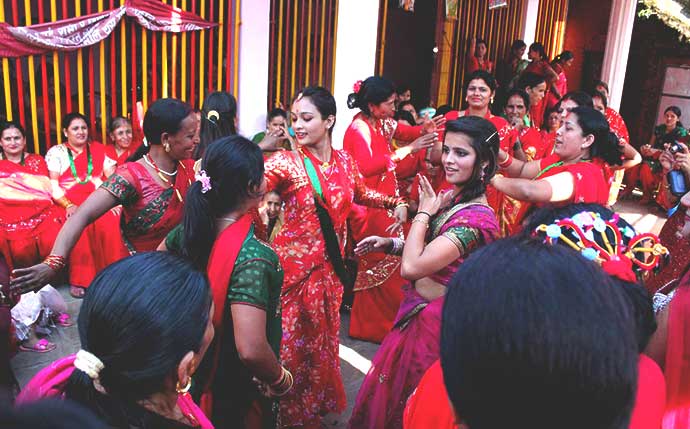 The Teej Festival of Jaipur is one of the colorful celebrations where different traditional local people take part in the party of the festival and visitors and tourists watch. It is one of the best lively and active celebration time to visit Rajasthan to be part of the Teej Festival. Women are only dress in green showing the start of monsoon season but all colors of freshness as in newlyweds.

It celebrated in several parts of Rajasthan, but most live in Rajasthan. The festival is organized at monsoon season and is not on a specific date each year. Although both men and women participate in the celebration, it mostly engaged women in the processions and preparations. There are also different types of Teej Festivals known as Hartalika Teej & Hariyali Teej, Kajari Teej. In Rajasthan, the Teej procession is carried out over at least two days in the Old City of Jaipur.

Importance of the festival

It marks the oncoming of the heavy rain the meaning of prosperity as vegetation develops inside the showers within the desert land of Jaipur. The festival celebrated at the third day of the new moon fortnight into Shravan, the Hindu month that falls between July & August of a calendar year.

As per considering of Hindu customs and in mythology, it stated that the Goddess Parvati and Lord Shiva got back together in this single day. After doing traditional religious penance and many one-of-a-kind births on the planet, it became a successful reunion among Goddess Parvati & Lord Shiva.

According to the mythology, it is still the 107th re-birth that she eventually acquired Shiva as her husband after he customary her hard penance, devotion, and realized how a great deal she loved him. So, as it was after a long time and her perseverance that she ultimately got this second in her life, Goddess Parvati declared that this latter is an excellent auspicious time for girls & girls in their lives. On this auspicious day, if any lady invokes the Goddess, then she blesses them with a blissful married life.

During the Teej Festival in Jaipur, younger women and married girls take out a colorful procession taking a Goddess ''Teej Mata''. The Godees idol of the Goddess is dressed up in a vivid sari and accessories, and then they take out the parade while chanting spiritual prayers. It is the proper time to listen to the songs that the women sing even as taking place the procession. These are commonly devotional songs committed to Goddess Parvati. During three days of the festival, the womenfolk who are celebrating this festival does not sleep for three nights. This strict ritual is symbolic to the severe penance that Goddess Parvati did to attain the love of Shiva. The swings specially made and decorated in spring flowers, especially marigold, especially for the Teej Festival.